Raila: My promise to Kenyans 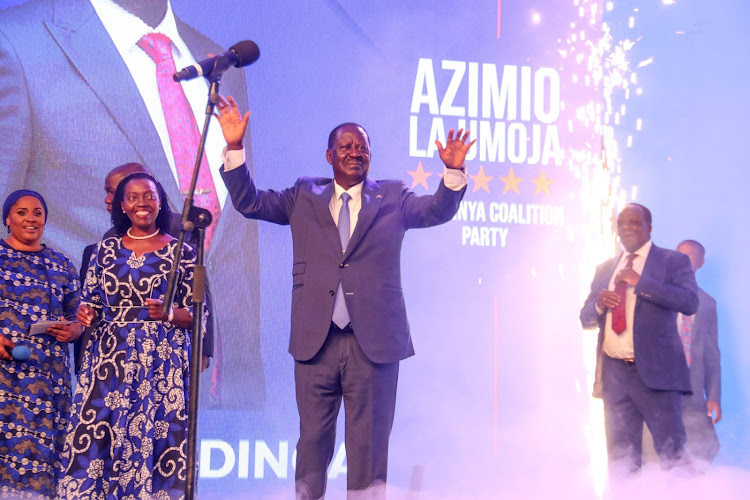 AZIMIO MANIFESTO: Azimio flagbearer Raila Odinga greets supporters at the unveiling of the Azimio Manifesto. Running mate Martha Karua is at his side at Nyato Stadium on June 6
Image: WILFRED NYANGARESI

Azimio presidential candidate Raila Odinga on Monday unveiled his 10 commandments, promising to jumpstart the economy within his first 100 days.

Speaking during a colourful evening event at Nyayo Stadium, he also pledged to reduce the cost of living as soon as possible and deliver double-digit growth in the future.

He emphasised a more compassionate Kenya.

In issuing his manifesto, the former Prime Minister also pledged to transfer Sh6,000 a month to needy families in his first 100 days.

And free education from nursery through college, university and skills training.

“This manifesto embodies the hopes and aspirations of our people, and outlines how they would like the business of government to be transacted on their behalf,” Raila said.

Raila is seeking the presidency for the fifth time on August 9.
News
4 months ago

In unveiling his blueprint for the future, the ODM boss outlined priority interventions he said will transform the lives of Kenyans.

Raila pledged his government will enforce zero tolerance to corruption, scale up universal health care and expand the space for media expression.

The leader of Azimio la Umoja One Kenya political coalition promised free education from nursery all the way to college and university.

As president, Raila said, he would increase funding to the 47 county governments, ensure food security, provide water to every home and increase jobs. 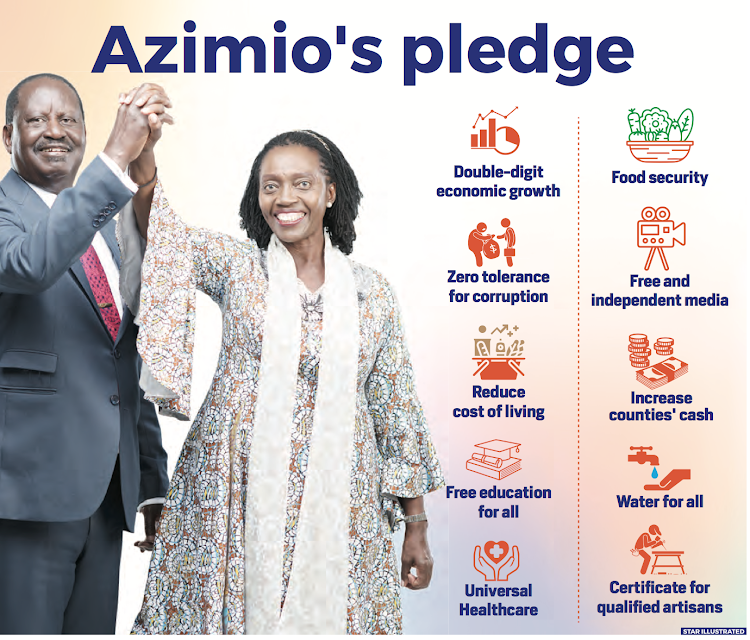 He said one avenue would be recognition of prior learning certification for qualified artisans. That would give them access to government contracts and more work.

Raila said he will focus on progammes that will greatly cushion Kenyans from the high cost of living that has made living unbearable to millions of citizens.

The Sh6,000 a month transfer to vulnerable households would be introduced swiftly.

Universal healthcare will become a reality in three months from his election, he said.

"[I will] ensure that every Kenyan shall receive adequate primary healthcare services as per need and this shall be free at the point of delivery – universal healthcare," Raila said.

He said all retired civil servants will continue receiving their medical cover at government cost.

On the fight against corruption, Raila said all Azimio members — appointed and elected — shall sign a specific anti-corruption charter that they shall not engage in any form of graft.

Odinga said he will ensure every child has access to education through his ambitions free ‘Waste No Child’ programme, from  university through varsity or technical training.

Odinga said he will direct Parliament to establish mechanisms to facilitate expeditious investigation, prosecution and trial of corruption and integrity-related cases.

He plans to review and introduce policies to regulate penalties and sentencing of offenders on the basis of proportionality. He pledged to accelerate recovery of the proceeds of corruption and illicit financial flows.

Odinga said he will ensure every child has access to education through his ambitions free ‘Waste No Child’ programme.

It will also cover students in college, university and vocational training institutions.

“We will provide free education from ECD, primary and secondary to university including tertiary colleges,” Raila said.

Under the programme, the Azimio leader said, children attending Early Childhood Development classes and lower primary will be entitled to one nutritious free meal. The manifesto did not not state the frequency.

University students can access loans to facilitate their education.

To manage the expected increase in numbers of learners, the Azimio captain pledged to improve education facilities and infrastructure countrywide to guarantee a conducive and dignified learning environment.

Raila also reiterated his Baba Care programme will revolutionise the health sector by giving all Kenyans a chance to access affordable, quality and free primary healthcare.

In his universal healthcare plan, the former Prime Minister promised a robust investment in preventive health and sufficient essential drugs in every health facility.

Other promises included integrating and giving greater recognition to community health workers as partners at the grassroots level. He called it a cost-effective way to extend health services to hard-to reach areas, a last mile approach to healthcare.

We will expand existing cash transfer, including to the  elderly, orphans and vulnerable children,persons with disabilities

Raila, whose main rival is Deputy President William Ruto, unpacked his vision for Kenya a day after he was cleared by the electoral agency to run for president.

On food security, Raila promised his administration in collaboration with the county governments would work towards increased food production. This would be achieved partly through reducing the cost of agricultural inputs.

Single mothers will receive social assistance and Kazi Mtaani will be started permanently for unemployed youths.

To check the ever-growing number of unemployed youths, the Azimio administration will create a ministry of youth affairs to link the youths with jobs.

Raila's plans call for a seven-year tax holiday for start-ups for youth-run micro and small enterprises.

It will include accessible and affordable credit facilities on favourable terms including options for loan guarantees, the manifesto read.

On the diaspora front, Raila promised a close engagement including policy, laws and regulations review to incentivise the diaspora to invest in Kenya.

Diaspora remittance currently stands at $3.7 billion (Sh432.5 billion) annually, translating to more than three per cent of the country’s GDP.

On devolution, the Azimio team plans to prioritise the immediate transfer of all outstanding county functions and increase counties allocation to a minimum 35 per cent of shareable revenue.

The Azimio administration is also proposing life sentences for anybody involved in poaching, trafficking and possession of ivory and rhino horn.

To realise his plans, Raila has adopted a three-phased approach, including economic re-engineering for wealth creation through manufacturing, production and increased investment in home-grown industries.

The former PM is also banking on people’s welfare through the social protection programmes and conservation of the environment.

“Thirdly, by ensuring all Kenyans have unfettered access to basic public goods like education, healthcare, food and nutrition, water and sanitation and cushioned from such vagaries of nature as climate change,” Raila said.

The presidential candidate said his administration will be a compassionate government that will strive to uplift the dignity of all Kenyans.

Restore trust between community and police

At least six police officers in every police station will be trained and equipped to handle police-youth relations to restore trust between the officers and citizens.

“This Azimio vision honours the sacrifices of preceding generations. We will build on the gains already secured and will in no way corrode the commonwealth and our national heritage by succumbing to greed, corruption and a culture that only abets self-advancement of few individuals,” he said.

Raila termed the document his social contract with the people of Kenya, billing it as the roadmap towards a better country for all.

On security, Raila said he will fast-track the implementation of police reforms to enhance the performance and service orientation of the National Police Service.

He will assign at least six police officers in every police station who are trained and equipped to handle police-youth relations to restore trust between the officers and citizens.

On foreign relations, Raila said he will aim to attract foreign capital and investment flows while at the same time safeguarding the national interest.

His foreign policy will tap  geo-economics to establish good relations with the international community through trade and investment.

He said his administration will review Kenya’s participation in international trade negotiations to ensure national interests are served.

On public debts, Raila he said he will aggressively pursue debt relief negotiations and a debt management plan. He also plans to strengthen the role of the National Treasury.

Says some counties have experienced unexplained one million increase in their voters in the polls register.
News
4 months ago

Raila is seeking the presidency for the fifth time on August 9.
News
4 months ago

Wanjigi: Why I fell out with Raila

The Safina Presidential aspirant blames Odinga for his about turn to Egypt.
News
4 months ago

Kipruto Kirwa: Why I dumped Ruto's UDA for Raila's Azimio