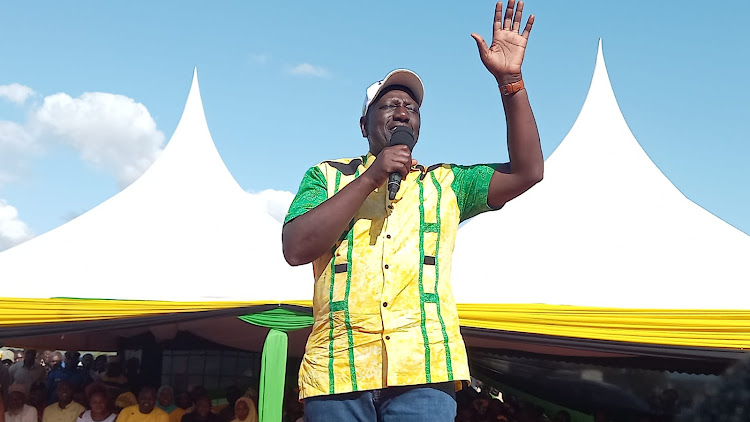 Through a letter signed by secretary general Veronica Maina, the party wants the DPP to invoke article 157(6)(a) of the Constitution and press charges against the officers to safeguard a free and fair electoral process.

"The Cabinet Secretaries and the Principal Secretary being state officers are in breach of Section 15 of the Election Offences Act, 2016 for using their offices to engage in active support of the Azimio Coalition Presidential candidate and  for publicly indicating their support for their preferred candidate," Maina said.

She said the state officers have been accompanying the Azimio flagbearer to his campaigns, pledged support for his presidential bid and vowed to leverage on the administrative structures to ensure he wins the August 9 polls.

In particular, the UDA SG accused Matiang'i of directing administrative officers under him to the village level to respect President Uhuru Kenyatta's preferred presidential candidate.

Other than breaching the Election Offences Act, Maina told the DPP that the state officers have also violated the Constitution, the Leadership and Integrity Act and the Public Officer and Ethics Act.

The laws prohibit state officers from engaging in any political activity that may compromise or be seen to compromise the political neutrality of their office.

"The involvement of the Cabinet Secretaries and the Principal Secretary also raises doubt on their neutrality and it is barefaced, unconcealed and blatant conflict of interest," she said.

Maina further pointed out that the Interior and ICT ministries have key roles to play in the administration of the forthcoming General Election and cannot be seen to be partisan.

She dismissed as flimsy the argument that state officers are at liberty to support a candidate of their choice in an election on the strength of Article 38 of the Constitution.

"The attempt to exempt Cabinet Secretaries from the application of this provision on the view that they are not 'public' but 'state officers' must be frowned upon as such an interpretation would render Article 259 of the Constitution nugatory as it negates the purpose of the Constitution an good governance," Maina said.

UDA said CSs must be neutral or resign and become official ODM agents.
News
3 months ago

Blow to civil servants as court says no to active politics