Our deal in Kenya Kwanza was for you, Mudavadi tells Western 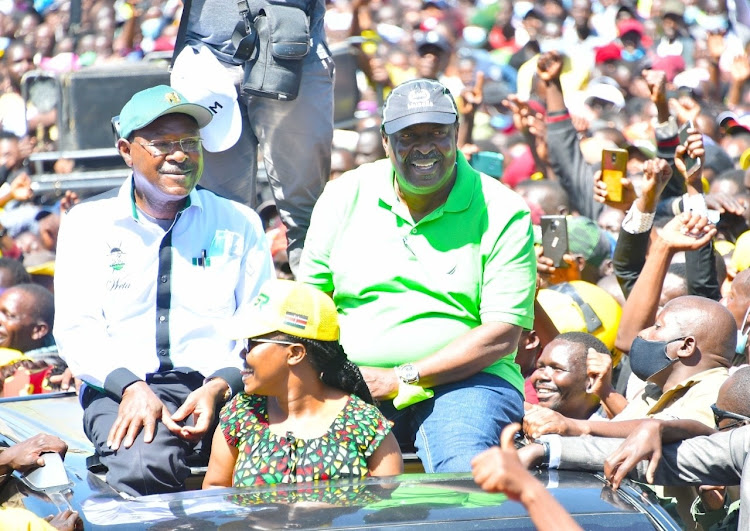 The two were back in the region after barely two weeks to convince residents they stand to benefit more in Kenya Kwanza Alliance than in Azimio la Umoja-One Kenya coalition.

Addressing a rally in Lumakanda, Kakamega county, Mudavadi told residents he, together with Wetang'ula, negotiated “a deal like no other” in Kenya Kwanza.

“Weta is a lawyer and he knows what is in store for the region if Deputy President William Ruto forms the next government. We are asking you to vote in large numbers for Kenya Kwanza because that is where you stand to benefit the most,” he said.

Wetang'ula said their deal in Kenya Kwanza is for the good of the community and was not tailored for individuals.

“We want good for our community. We want change and that is why we have united with the Deputy President. As your leaders, we are not pursuing our individual interests, but those of the community,” the Bungoma senator said.

Wetang'ula said the deal was not just for the Luhya people but the Sabaot, the Teso and all other communities living in the Western region.

“We have said the Luhya community, the Sabaot and Teso and all others in the region must have shares in government," he said.

"We want our fair allocations during recruitment in the disciplined forces, teachers training colleges and the Kenya Medical Training College. We also want to tell you Mumias Sugar Company, Pan Paper and Nzoia Sugar will all be revived.”

The deal in Kenya Kwanza requires Mudavadi and Wetang'ula to deliver 70 per cent of votes in Western to Ruto for them to claim a 30 per cent stake in government.

Mudavadi believes they can deliver up to 90 per cent of Western Kenya votes to Ruto's basket.

Western region has been seen as a stronghold of Azimio la Umoja-One Kenya coalition presidential hopeful Raila Odinga, judging from the support he has received in past elections.

But on Tuesday, Wetang'ula said Raila had been receiving massive support from residents because of Mudavadi and himself.

“Raila has been getting support in Western because we supported him in Nasa and Cord during past elections. We are not with him now,” he said.

The two also addressed rallies in Cheptais in Mt Elgon, Angurai in Teso North, Shinyalu and Khwisero in Kakamega and Hamisi in Vihiga county.

They were accompanied by Mumias East MP Ben Washiali, Kakamega Senator Cleophas Malala and a host of local leaders.

The Kenya Kwanza team was at Mungatsi Technical Training Institute in Nambale on May 6 for the Busia Economic Forum.