The role of infrastructure development in Kenya’s growing economy

Commercial freight services on the SGR began on January 1, 2018 and passenger uptake has exceeded expectations, with the train carrying 2 million riders in the first 17 months of operation. 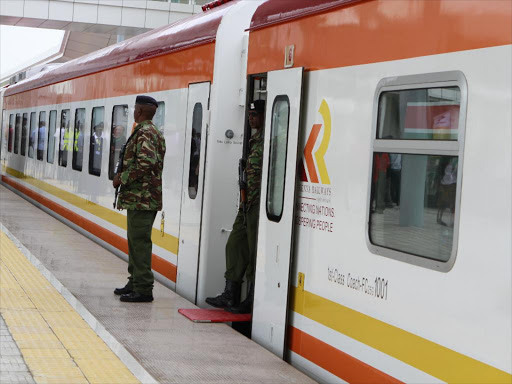 HANDOVER: Police officers manning the entrance to an SGR train at the Mombasa terminus, May 2017.
Image: MONICAH MWANGI

Infrastructure development is recognised globally as a critical pathway to economic take-off. This is because it promotes intra-country linkages and strengthens regional or international production and distribution networks.

Kenya boasts one of the best infrastructure networks in Africa's South of Sahara. In Nairobi, East Africa’s business and financial hub, the skyline is changing.

From the ageing buildings, potholed roads, and chaotic transport systems, a new order is emerging.

Infrastructure development has continued to attract attention both globally and nationally because of its critical contribution to sustained economic growth and development.

By continually improving infrastructure, the Kenyan public sector will create an environment where public and private organisations can attract talented executives from the local, diaspora, and expatriate talent pools.

The outcomes of the burgeoning development expenditure on infrastructure have been an increase in the road network and connections to the national grid.

It is envisaged that these outcomes stimulate or translate to the growth of the manufacturing sector.

Since 2017, the increase in allocation of more funds to the development of transport infrastructures during annual budgeting by the government has enabled the development of more roads, railway lines, sea transport; upgrades by the building of new ports and berths, and upgrading of airports in the country.

This facilitates the movement of people and manufacturing products from the production to consumption or value addition points easily saving costs.

To connect to the Malaba border, the metre gauge railway from Naivasha is being linked to the SGR, then to facilitate trucking, the government has invested more in roads and bridges to open up the port city.

Commercial freight services on the SGR began on January 1, 2018 and passenger uptake has exceeded expectations, with the train carrying 2 million riders in the first 17 months of operation.

By November 2018, the SGR was operating 30 freight trains and four passenger trains per day. double stack freight trains have run on the line since 2018.

The increase in tonnage and revenue was partly attributed to the full utilization of the expanded Nairobi Inland Container Deport (ICD), the re-introduction of double-stack and long freight trains.

In addition, enhanced collaboration between Kenya Railways and other agencies resulted in expeditious processing and evacuation of cargo.

According to Kenya National Bureau of Statistics (KNBS) data, for instance, road infrastructure spending grew to Sh200 billion in 2021 from Sh10 billion in 2003.

“There is a great need for affordable and manageable urban mass transit systems, together with the use of alternative modes of transport.

The easing of congestion and improvement of transit infrastructure could potentially ‘open up’ the greater East Africa region,” said President Uhuru Kenyatta in a recent address.

Kenya has anchored its infrastructural development agenda in the Vision 2030 economic blueprint, which was launched in 2008.

The blueprint outlines infrastructural expansion as the key to unlocking more benefits for Kenyans through various pillars.

“Infrastructure development is a means to, as well as the end-game, in the pursuit of the Big 4 Agenda pillars. Not forgetting to mention the African Union Agenda 2063, and the UN Sustainable Development Goal No 9.

The ripple effects of the massive infrastructure development can be seen in the job opportunities, opening up satellite centres for economic growth and improving traffic flow are among some of the dividends already realised.

The trickle-down effects of infrastructure growth are also expected to strengthen Kenya’s economic position in the Eastern Africa region.

It will help cement Kenya’s position as the service and commercial hub in the region through the provision of efficient port services to neighbouring landlocked countries such as South Sudan, Uganda, Ethiopia, DRC, Rwanda and Burundi.