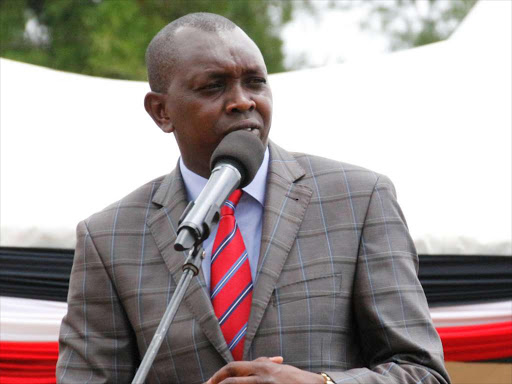 Kapseret MP Oscar Sudi at a past event
Image: FILE

The former principal of Highway Secondary School has told court that Kapsaret MP Oscar Sudi did not sit for KCSE exam at the school in 2006.

Patrick Maritim on Thursday confirmed the earlier testimony of an official from the Kenya National Examinations Council that Sudi did not register or sit for the 2006 examination.

He told magistrate Felix Kombo that Sudi’s name did not appear anywhere in the school's register when he was the principal.

The witness, now a county executive in Bomet, said sometime in 2015 he received a letter from the anti-graft body seeking information on Sudi’s enrolment at the school.

"They were requesting me to confirm whether Sudi's name was part of the school records and to avail the admission registry, which I did,” Maritim said.

Maritim said Sudi’s name did not appear in the register and index 81, which Sudi allegedly forged, belonged to Nicholas Otieno.

“The KCSE certificate is normally obtained from Knec. The student will then come and sign that it has been collected. And from the records, it does not show Sudi sat for KCSE at Highway Secondary School,” the witness said.

Maritim was testifying against Sudi who has been charged with forging a diploma certificate in Business Management from the Kenya Institute of Management.

Earlier accounts by former head of examinations at KIM John Mateshe said their records showed Sudi was never registered as a student at the institute.

Mateshe, who was the tenth prosecution witness, told the court that a copy of Sudi's certificate presented to the institution by EACC was not genuine.

“The number 36262 on the certificate presented to me belongs to a certificate issued to one Elkana Kimutai of admission number NRB/20870 for a diploma in purchasing and supplies management which was issued on September 24, 2009,” the witness said.

Thursday’s proceedings, for instance, had to proceed in his absence after the magistrate said he was not convinced by the reasons adduced by the accused’s lawyer that he was sick.

Initially, he said he had traveled to Turkey for medical treatment but it came out yesterday that he was in Eldoret.

"These documents provided by the defence still don’t show the specific address where the hospital in Turkey is located," Kombo said.

"It is also now clear that your client did not travel. Why did you say he travelled? If he gave you instructions that were not true, tell me and leave it to the court."

The case had been scheduled to proceed for hearing as of Wednesday.

But it was adjourned after Sudi, through his legal team led by Thomas Ruto and George Wajackoya, asked for time to present the court with documentation proving the whereabouts of their client.

It is not clear what the legislator is ailing from.

But even with the adjournment, the lawyers on Thursday failed to satisfy the court over the absence of Sudi.

The magistrate took issue with a medical document signed by a doctor Austin Okoth.

“Is Austin Okoth a doctor?” Kombo asked. Sudi's lawyers could not confirm.

"I can't authoritatively confirm because these were documents sent to me by my client,” one of Sudi's lawyers said.

It was only later that the lawyers said they had no problem with the authenticity of the doctor being verified as they had confirmed he was genuine.

Sudi is in Eldoret not Turkey, lawyers tell court