Kagambi has climbed three of the world's seven highest Summits.

• Kagambi, who is the founder and owner of KG Mountain Expeditions, went on the trip with Full Circle, a group of Black climbers and mountaineers.

• Kagambi has climbed three of the world's seven highest Summits. 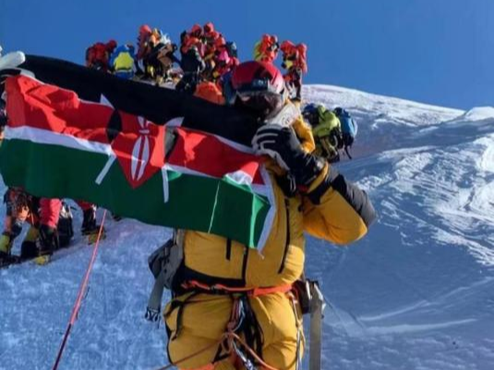 James Kagambi holding the Kenyan Flag when he reached the peak of Mt.Everest on Thursday, May 13,2022.
Image: Courtesy

By achieving the feat, he said he hoped he inspired others.

"I did not know that I would make it this far with my old age and my weak knees, but I pushed myself to the next level. Africans should know that this space exists for them too. "

He praised those who believed in his bid to climb Everest.

"We celebrate and congratulate him on this amazing feat," the Chinese Embassy in Nairobi said. 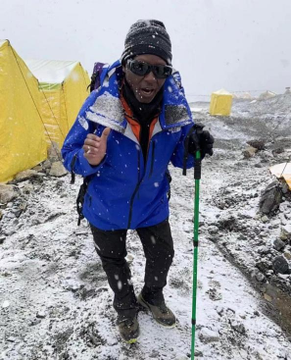 James Kagambi, first Kenyan to reach the peak of Mt.Everest on Thursday, May 13,2022.
Image: Courtesy

Kagambi, who is the founder and owner of KG Mountain Expeditions, summited with Full Circle, a group of Black climbers and mountaineers.

The retired teacher joined National Outdoor Leadership School as a field instructor in 1987.

He has been a backpacking, climbing and mountaineering instructor in Africa, Chile and the United States.

Kagambi has climbed three of the world's seven highest Summits and in 1992, he represented Africa in the UN Peace Climb for the world on the Eiger, Switzerland.

He was among five climbers to reach Mt. Kenya's Batian peak on December 12, 2013.

He hoisted the Kenyan flag to mark 50 years of Independence.

A 48-year-old Nepali woman scaled Mount Everest for the 10th time on Thursday.
Sasa
3 months ago

Kuria targets to plant 50,000 trees within the mountain's ecosystem.
Counties
9 months ago
WATCH: The latest videos from the Star
by SHARON MWENDE
News
16 May 2022 - 22:30