He says he will run as president on the Wiper ticket under the Oka coalition.

•Kalonzi says he will run as president on the Wiper ticket under the Oka coalition.

•He says that he will soon launch his manifesto because "this country needs an alternative. 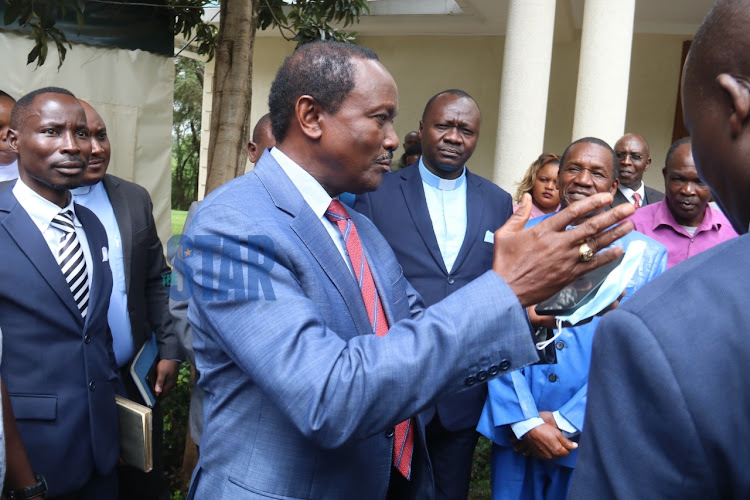 Wiper leader Kalonzo Musyoka has announced that he has decamped from the Azimio la Umoja One Kenya Alliance.

He said he will run for the presidency on the Wiper ticket under the One Kenya Alliance coalition after he felt shortchanged in the Azimio.

"If there is no faith, you can't do business... For how long will we sacrifice and even of we sacrifice, they mess up," he said.

He said that he will soon launch his manifesto because "this country needs an alternative.

Kalonzo said he, Raila and President Uhuru Kenyatta have been in consultation but the ultimate decision to pick Narc Kenya leader Martha Karua as Azimio's running mate was Raila's.

"Raila tried to convince me to accept Martha as his running mate," he said.

The Wiper boss says his name is already with IEBC as Wiper Presidential candidate.

"If OKA had not been messed up, I would have convinced my brother Gideon Moi to be my running mate," he says.

The Wiper team had insisted that Raila picks Kalonzo as his running mate.

He even skipped Raila's rally in Nairobi's Kamukunji grounds on Sunday although he was in the city.

Instead, the Wiper leader held talks with his newfound ally, Kanu chairman Gideon Moi as his allies said they are moving to court to dis-engage from the Azimio.

Makueni MP Daniel Maanzo termed the agreement unconstitutional and said Raila is no longer interested in being president.

"We [Wiper team] have only one option, to run for president. Martha Karua cannot even hold a meeting in Central. She adds no value. Raila no longer wants to be president," Maanzo told the Star

Last week, Makueni Senator Mutula Kilonzo publicly said Kalonzo will get back to the presidential contest if he is not the Azimio running mate.

Since teaming up with Raila on March 12, Kalonzo and Raila have only campaigned together in Turkana as suspicions between them deepen.

Should Kalonzo vie for president as an independent candidate?

Should Kalonzo vie for president as an independent candidate?
Poll of the day
8 months ago