DP Ruto picked the Mathira MP as his presidential running mate in the August 9 General lection.

• The meeting extensively discussed various matters that are necessary and important as we gear up for the August 2022 election. 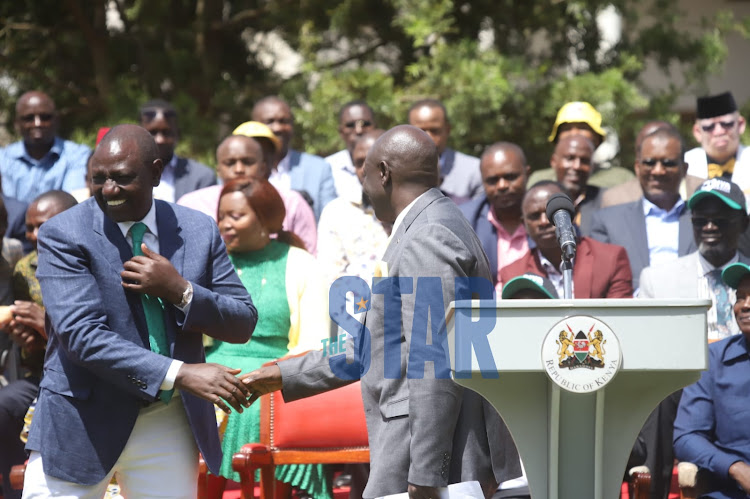 DP William Ruto after unveiling Mathira MP Rigathi Gachagua as his running mate at his Karen residence, Nairobi on May 15, 2022.
Image: ANDREW KASUKU

On Saturday 14th May 2022, we had a Kenya Kwanza family 17-hour marathon meeting, involving party leaders in the Kenya Kwanza Alliance, Governors, Members of Parliament and other leaders.

The meeting extensively discussed various matters that are necessary and important as we gear up for the August 2022 election. Amongst the issues discussed were:

1. The integration and orientation of the new partners that have joined the Kenya Kwanza Aliance, and the formalization of their participation in the coalition activities in the next 3 months.

2. We agreed on how to share responsibilities and provided leadership on how the campaign program will be coordinated to facilitate a Kenya Kwanza win in the first round.

3. Also on the agenda was the harmonisation of the different policy positions of the alliance’s constituent parties to correspond to the economic blue print that is at the centre of the Kenya Kwanza political agenda.

4. Consenquently, we have a tasked a team to work on the following:

Nobody has to lose, for the other to gain.

- Eliminate pilfirage and corruption to conserve resources and manage our debt situation, which is a source of concern to millions of Kenyans.

To facilitate and fastrack this process, parties that have recently joined the Kenya Kwanza Alliance have recommended the following people to work in the alliance economic team, led by economist, Prof. David Ndii;

In our meeting yesterday, we also greed on the coordination of Kenya Kwanza Campaign

activities, and the modalities of how our multiple candidates will be engaged in the campaign to avoid unhleathy competition.

As Kenya Kwanza we are a coalition of democracts, the willing and the free. There will be no zoning. All parties will be allowed to field their candidates. We will however as Kenya Kwanza empower our candidates in every ward, constituency and county with scientific information on the performance of each and every candidate and encourage local agreements amongst the different parties in different electoral areas, to negotiate and agree on the best approach to our alliance winning a majority of seats at every level.

We will also provide a template on how our candidates will be coordinated in every county and every constituency. Towards this end we have tasked,

VIII. In North Eastern, we have Hon. Adan Duale and Ahmed Kolosh

You are all aware also that we have been in the process of appointing a running mate for the Kenya Kwanza Alliance.

Many highly qualified names have been considered, and I have engaged in lengthy and

Exhaustive conversations, consultations, deliberations and reflection on my final pick.

In the end, the consensus pointed out an individual who scored excellent points on every

An astute debater with prodigious persuasive ability. A fantastic grassroots mobiliser. A

A successful elected politician and businessman. A principled politician of tremendous resilience and steely resolve. A fearless fighter for the right causes, and an indefatigable champion of the betrayed, persecuted, downtrodden, the despised, the ignored and the marginalized. A living example of a true hustler who rose from the hardship of the aftermath of our freedom struggle to the pinnacle of professional, business and political success.

We are nominating a Running Mate whose functions of as per Article 21 (E) of the Kenya Kwanza Coalition Agreement are as follows;