• Transport CS James Macharia said that Kenya is working with the private sector to make affordable housing projects work well, for the benefit of its citizens.

• "The provision of affordable land and housing at scale remains a challenge to most countries, especially those in Africa," UN-HABITAT Director Regional Office for Africa, Oumar Sylla. 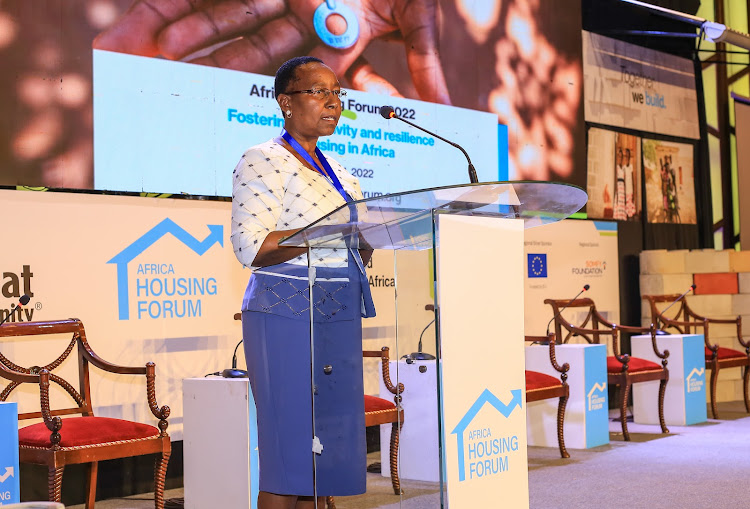 Mrs.Jane Mwangi ,National Director Housing -Kenya during the 1st Africa Housing Forum by Habitat for Humanity International in happening in Nairobi from Thursday, May 12 to Saturday, May 14, 2022.
Image: Department of Housing.

Speaking at Africa's Housing summit, Macharia called for cohesion between the public and private sectors to adopt and implement affordable housing solutions for marginalized communities to enhance the quality of life for humanity.

The summit dubbed 'Habitat for Humanity International' is the first-ever Africa Housing Forum and was held on Thursday in Nairobi.

The event was organized by Habitat for Humanity in collaboration with partners that include UN-HABITAT.

Shelter Tech is the world’s leading platform for affordable housing innovation, working across geographies to support and grow cutting-edge products and services that can improve housing conditions for low-income families.

Since its first accelerator program in 2017, the platform has already supported more than 70 startups worldwide.

“It is critical to recognize housing as a human right. The protection of the human right to housing should always be a priority placed above the use of housing as a commodity,” Makoloo said.

"The provision of affordable land and housing at scale remains a challenge to most countries, especially those in Africa," UN-HABITAT Director Regional Office for Africa, Oumar Sylla said.

The three-day event was attended by more than 500 people from at least 25 countries in Africa, with a focus on the urgent need for sustainable and innovative solutions that do not leave vulnerable groups behind.

The conference comes as Africa grapples with an acute housing shortage.

Many of the 40,000 people moving to African cities every day cannot afford basic formal housing or access mortgage loans.

A lack of adequate housing affects 14 and 16 million people in Nigeria.

The Africa Housing Forum is supported by the Hilti Foundation, the European Union, and the Somfy Foundation.

It is the fourth such event held around the world over the past year.

Summit’s significance has risen after Covid pandemic upended life
Sasa
1 week ago
WATCH: The latest videos from the Star
by SHARON MWENDE
News
13 May 2022 - 15:16