Not yet Uhuru for media: Journalists recount woes

• Reporters face threats to their safety, especially from the digital environment 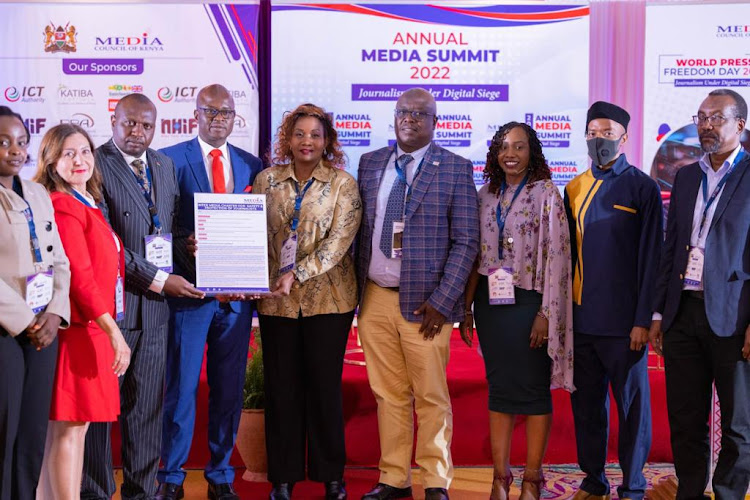 Media Council CEO David Omwoyo (3rd Left) presides over the launching of the Intermedia Charter on Safety and Protection of Journalists at Safari Park Hotel, Nairobi, on May 5
Image: MCK

Media stakeholders last week painted a picture of a sector on edge as the country emerges from the effects of Covid-19.

From poor working conditions of reporters, mental health concerns to the limitations due to the multifaceted digital era, the sector players said creative interventions need to be instituted.

The players spoke during the Annual Media Summit at a city hotel to mark the World Press Freedom Day.

Chairman of sector regulator Media Council of Kenya Maina Muiruri said most media houses in the country slashed the salaries of journalists and are yet to restore them.

He said this has lingered despite the government scaling back the Covid-19 restrictions and the economy rebounding.

Some outlets are not paying the reporters well, while other not paying at all, he said.

"Let's pay the journalists well. The Covid-19 restrictions have been scaled back. The outlets should restore the salaries of the journalists that were slashed," he said.

Muiruri also said some outlets are not remitting the dedication meant for saccos to the financial institutions, thereby denying the reporters access to private loans from the saccos.

Victor Bwire, the director in charge of training at the council, called out certain outlets for drawing lopsided contracts to engage journalists with low pay, which in some cases delays.

"Some media houses are substituting correspondent contracts and are now calling them contractors, just like those supplying milk and other consumables in the newsroom, yet they are professionals," he said.

"Correspondent used to be a prestigious title. But now you get that correspondents are not paid on time and you want them to remain ethical in their work. It is not possible."

He said the council has dealt with numerous cases where reporters have had anonymous people send them direct messages that are threatening their safety after working on a given story.

"We have dealt with many cases where reporters deal with threats from social media after working on a given story in which some actors had interests," Omwoyo said.

In some instances, he said, the reporters have complained to them about being surveilled in the newsroom, especially where there are converged systems for managing content.

"We have also had to deal with instances where reporters get threats from the newsroom itself. Their colleague gives a heads-up about a story another is working on in the newsroom to actors with interest in it and they give threats."

Omwoyo also decried the scourge of fake news and misinformation in the run-up to the election.

Moreover, it also emerged that mental health is a major concern that has not been adequately dealt with in the newsroom.

Panelists, including professionals from the Ministry of Health, private sector and the Media Council, asked media outlets to institute responsive means.

They called for standby therapists and counsellors to help reporters be on their feet in so far as mental health is concerned.

"Journalists are human beings and get emotionally and mentally distressed, especially when they cover traumatising stories like death, murder, suicide," Dinnah Ondari from the Media Council said.

"There is a need for editors to ensure that they get debriefed and counselled when in distress after such encounters."

How press freedom is eroding as media struggles to survive

State and private entities are exploiting revenue woes to influence decisions
News
1 year ago
Journalists can change the world
by GORDON OSEN
News
13 May 2022 - 23:00