Says he has the cure to the perennial land injustices 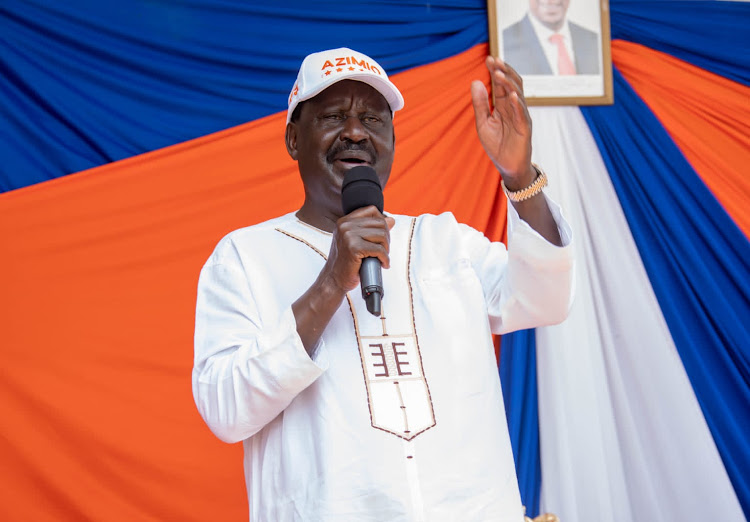 ODM leader Raila Odinga has said he will end historical land injustices and revive the agricultural sector at the Coast, once elected president.

He also said he will improve road infrastructure and the fishing sector.

Raila spoke in Kinango on the third day of his four-day visit at the Coast.

“For so many years, the issue of historical land injustice at the Coast has remained unresolved. We in Azimio, have an elaborate plan on how that problem will be addressed,”  Raila said on Friday.

He said he has the ‘medicine’ for the land injustices.

“I’m sometimes called by your leaders to help in solving land problems. I have to call the Lands Cabinet secretary or his security counterpart to come and intervene.

"However, a time is coming when we shall resolve this perennial land problem. We will make sure every person in this region has a title deed,” Raila said.

The Azimio flagbearer said all the major infrastructural projects happening in Kenya’s south coast, were conceived when he was the Transport Cabinet minister and prime minister in the grand coalition government.

“I was personally involved in the drawing and designing of these road projects. Some have since taken off, but some are yet to start. When we take over in August, we shall embark on all the pending major road projects in this region,” he said.

“All these projects are my brainchild. I came to this place when you could not access it by road. We shall therefore ensure that they are achieved in our government,” Raila said.

The ODM boss said his government will also fast-track the construction of the multi-billion Mwache Dam project, which will help revive agriculture and supply enough water to the residents.

The Sh20 billion Mwache multi-purpose dam project in Kwale was set to begin in February, however residents complained to Raila that they had been sidelined in its implementation.

Raila said he will ensure that residents get employed in the project.

The dam project requires more than 250,000 acres of land and will displace approximately 12,000 persons.

The Mwache Dam, which is an 87.5 metre-tall concrete gravity dyke, will have a capacity of 186,000 cubic metres daily.

It will put more than 2,600 acres of land under irrigation in Kwale county.

“Apart from Mwache Dam, we will put up other dams to take advantage of the floods wreaking havoc in this region,” Raila said.

The ODM leader also took time to campaign for his party candidates.

He said Kwale Governor Salim Mvurya, who was first elected on an ODM ticket in 2013, has betrayed him by siding with Deputy President William Ruto.

“He (Mvurya) was brought to my office in 2013. He could not even express himself in public, but I helped him become the first governor here. He has now decided to join the other side, we have no issue with that,” Raila said.

Mvurya is campaigning for his deputy Fatma Achani to take over from him.

Raila said Kwale residents should vote for Hamadi Boga, who until recently was serving as the principal secretary for Agriculture.

“Boga has proven beyond doubt that he will bring change in Kwale,” he said.

DP now has the backing of Salim Mvurya (Kwale), Kilifi and some MPs in all the six Coast counties
Counties
1 week ago

They say construction of health dispensaries, ECDE facilities, water projects and roads have stalled because of the feud
Counties
2 weeks ago

Say first 100 days would be administration transformational and another six months for economic changes
Counties
2 months ago
“WATCH: The latest videos from the Star”
by ALLAN KISIA AND CHARLES MGHENYI
News
13 May 2022 - 23:00