• Achoki urged the residents to be cooperative and help the multi-agency team in restoring peace in the region.

•Some eight suspected militias were arrested this week and three AK 47 rifles, and one G3 rifle were recovered. 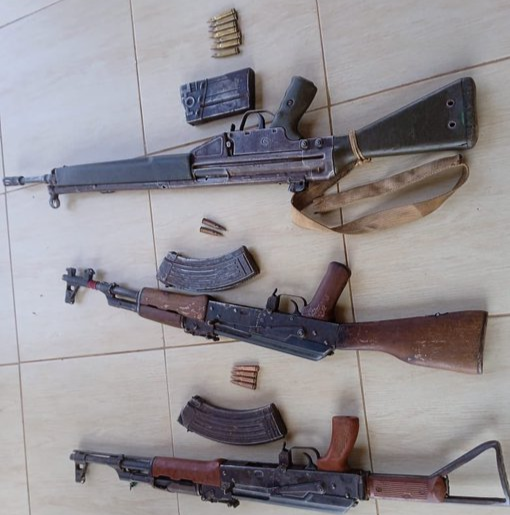 The three illegal firearms handed over to police on Friday, May 13, 2022.
Image: DCI

Community elders based in Bubisa, Marsabit County, on Friday morning surrendered three firearms to security officers based in Turbi.

The Directorate of Criminal Investigations said that the elders surrendered the rifles through their chief.

"Through the area chief Joseph Jirm, the elders surrendered two Ak-47 assault rifles and a G3 rifle, heeding a call by the government to the warring communities in the area to embrace peace as the surest way of assuring sustainable development."

The sub-county security team comprising of police, DCI and National government officers welcomed the move and urged other elders to emulate the good example set by their Bubisa counterparts.

This comes two days after a multi-agency team in the area arrested eight suspected militants and recovered three AK 47 rifles, one G3 rifle and a General Purpose Machine Gun.

The county is still on a 6 am to 6 pm curfew to help security personnel to secure all illegal guns and end violence in the area.

On Sunday, Eastern Regional Commissioner Evans Achoki said that the root of insecurity in Marsabit is the presence of illegal guns.

Achoki urged the residents to be cooperative and help the multi-agency team.

He also asked those in possession of the illegal firearms to surrender them voluntarily without delay.

The suspects will be arraigned on Wednesday to face various charges.
News
1 week ago

A pistol was recovered from a passenger on on a Moyale bound bus.
News
2 weeks ago
WATCH: The latest videos from the Star
by SHARON MWENDE
News
13 May 2022 - 13:48