The rally had earlier been scheduled to take place at the historical Tononoka grounds. 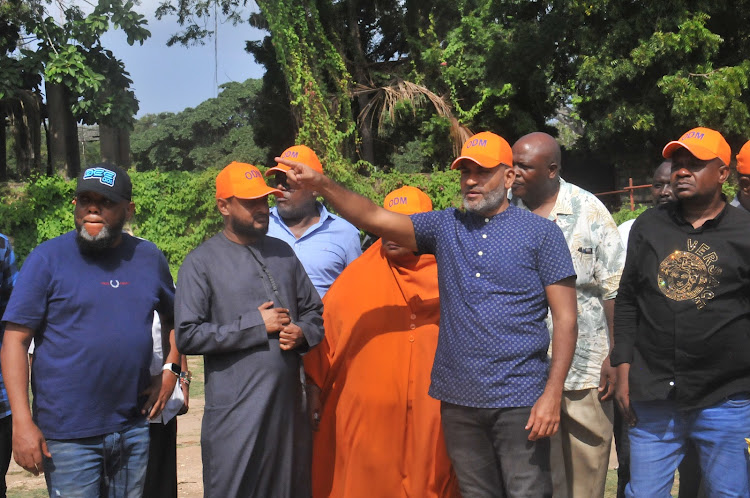 It is all systems go for the Mombasa Azimio la Umoja One Kenya coalition rally on Saturday which will be graced by ODM party leader Raila Odinga.

Mvita MP Abdulswamad Nassir led the Azimio planning committee to inspect the ASK grounds where the rally will take place.

The rally had earlier been scheduled to take place at the historical Tononoka grounds.

Briefing the media on Friday, Nassir said that a mega coast declaration will be made during the Mombasa Azimio rally.

“Tomorrow we want to make a coast declaration, it will be something big, mark my words,” Nassir said.

Concerning the last-minute change of venue, Nassir said that they want to go to every area of Mombasa.

He said that what is most important is not the venue, “but the message.”

“The last meetings that our party leader has had were all in Tononoka. This time round we want it to be somewhere else so that everyone can feel his leadership,” he said.

He refuted claims of ODM bulldozing Azimio and pushing away other coalition partners in the coalition activities.

There was disquiet among other parties within the coalition who felt left out in planning for the Azimio presidential candidate’s four-day coast tour that began on Wednesday.

However, ODM Mombasa chair Mohammed Khamis reiterated that no party was left out in the tour.

“This is an Azimio event, we (ODM) are here because we were all invited to attend. Some may not be here but have sent their apologies,” he said.

Mombasa Jubilee party vice-chairman Richard Barake confirmed that they were fully involved in the entire tour.

“Azimio is a big house with different parties. It is untrue to say that ODM is shoving other parties,” said Barake.

“We as Jubilee have filled candidates in all elective positions in Mombasa except the governor. There is no single day that I have seen ODM pushing us away."

He said that the Azimio brigade in Mombasa was walking as one family urging supporters of all parties in the coalition to turn out in large numbers to listen to their presidential candidate.

“We believe that as we head to the August election, every party will have a fair chance to sell their agenda to the people so that the best person can win. We shall be having a friendly match between Azimio partners,” he said.

His sentiments were echoed by Ali Rama Mbeto of KANU who said that all parties within the coalition were ready to work together to ensure that Raila wins the presidency in August.

Earlier, a section of Jubilee MCA aspirants in Kilifi had accused ODM of locking them out of Raila’s tour of the county on Thursday.

Led by Khalid Bokle, Mtepeni Ward Jubilee aspirant, they said that they were denied a chance to address the crowds.

“Despite our efforts to show unity in Azimio, our ODM counterparts hijacked the activity pushing us out. At one point, the microphone was switched off when I wanted to address the people,” said Bokle.

Bokle called on his party leader to come down to the Coast people and settle the disquiet building up.

“We want our party leader president Uhuru Kenyatta to know that Jubilee is very strong at the coast. Let him not focus his activation programs in the Mount Kenya region alone,” he said.

Kingi denied that Raila made him what he is today.
News
2 weeks ago

The panel submitted three names to the Azimio candidate Raila for consideration.
News
2 weeks ago
“WATCH: The latest videos from the Star”
by ONYANGO OCHIENG
News
13 May 2022 - 19:33