• Allan Makana, who claimed to be Kibaki’s grandson, appeared overwhelmed with emotion when he slightly unsettled the Mass by approaching the pulpit. The archbishop consoled him.

• Kibaki always insisted he had only one wife. 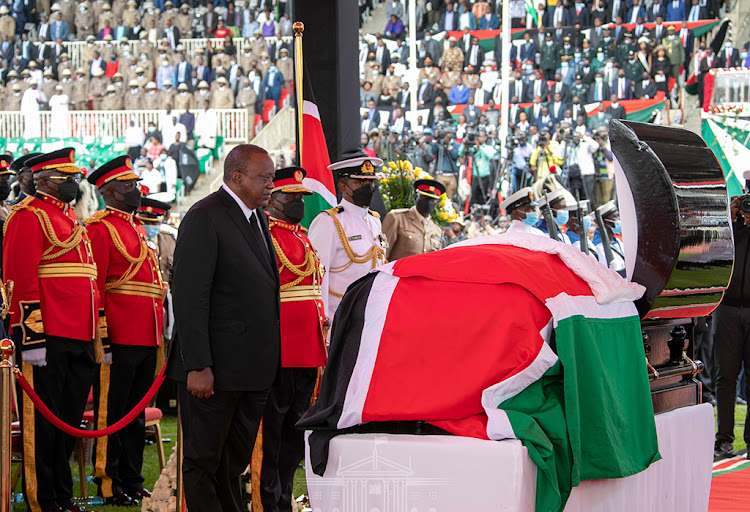 Archbishop of Nyeri Anthony Muheria created a stir when he embraced an emotional man, who claimed to be former President Mwai Kibaki's grandson, during the requiem mass.

Kibaki always said he had only one wife.

The Catholic Archbishop has said his reaction to the overwhelmed man at Nyayo Stadium was instinctive and a process of grace.

Muheria told the Star on Wednesday he was moved when he saw “this young man who was deranged, disturbed and overwhelmed” and decided to embrace him for comfort.

“I was natural in my reaction. I would say there was no process of thinking. To be honest I would be lying to say I knew what was going through my mind because it doesn’t give you time to think. It is instinctive, it is what you assess and what comes to you naturally,” Muheria said.

The requiem mass was held on the April 29. Kibaki was then buried the following day at his Othaya backyard with full military honours.

The man, Allan Makana, who had claimed to be Kibaki’s grandson, appeared overwhelmed with emotion when he slightly disrupted the mass by attempting to approach the pulpit where Muheria was celebrating mass

He walked up to the pulpit and asked Muheria for a minute to give a brief speech.

Security officers followed him, ready to arrest him. But Muheria embraced him.

He took a minute to console him. Moments later, officers seized Makana.

Archbishop Muheria then remarked that Makana should be treated well because he was a son of Kenya overwhelmed by the loss of the retired president.

He asked the officers to to be kind to him in what has been widely hailed by Kenyans as master class in compassion.

Muheria told the Star that when he saw the man, he felt a compelling sense of mercy towards him and saw it as a duty to be kind to him.

He said the country needed leaders who would exercise mercy and grace as they serve.

“I think people have to believe in the process of grace. That God gives you in a moment, a grace of what to do and the right thing to do. I thank God that was the grace I got at the moment and I can’t try to disown own it...there is really very little logic when it comes to it.”

He said he was glad that the gesture has been recognised in the country and hopes that compassion becomes the norm in every moment.

Muheria won the hearts of Kenyans after he calmly handled the situation.
News
2 months ago

The video has been edited for a motive yet to be established.
News
3 months ago

He is believed to be the same man who stripped at Parliament Buildings on Tuesday.
News
3 months ago

Drama as wailing man now claims he is Kibaki's grandson

"Why have you gone too soon," he said, amid tears.
News
3 months ago

Allan is the lastborn in a family of eight.
News
3 months ago
“WATCH: The latest videos from the Star”
by GORDON OSEN News Journalist
News
11 May 2022 - 23:00