•The CS warned that the country risked having a large number of criminals buying their way into elected office.

•The CS also identified abuse of social media as another worrying source of concerns on election security and credibility. 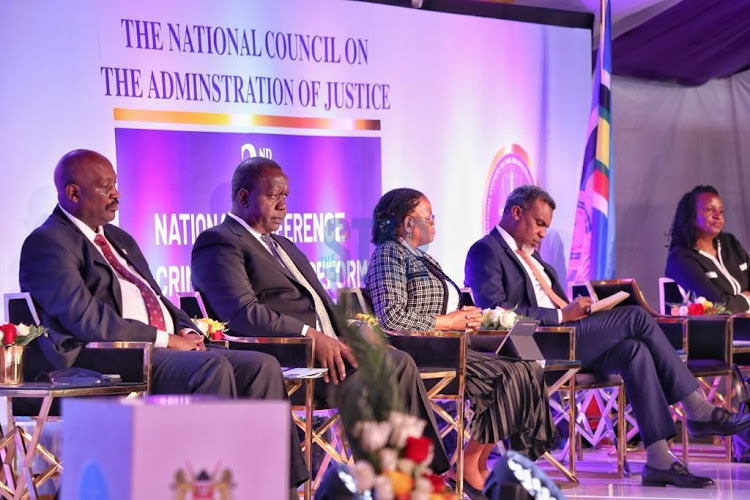 The government has identified weak regulations on the amount and source of campaign funds as a major threat to the credibility of the August General elections.

Interior Cabinet Secretary Dr Fred Matiang’i told a forum of stakeholders in the criminal justice system that money launderers and other criminals were taking advantage of lax financial regulations to manipulate the electoral process.

Addressing the 2nd National Conference on Criminal Justice Reforms in Naivasha, the CS warned that the country risked having a large number of criminals buying their way into elected office.

“We could end up laundering criminals of unprecedented standards into our elective offices. We might have over 40 per cent of elected officeholders becoming our leaders if we allow all the ‘wash wash’ gangs and other criminals to bribe their way in the coming elections.”

He, however, absolved the Independent Electoral and Boundaries Commission (IEBC) from blame for the weak regulatory framework on campaign financing saying an ideal stringent legal regime would need a multi-sectoral approach.

The National Assembly recently amended the Elections Act to delete sections that sought to limit the amount of money that could be spent by political parties and candidates while canvassing various electoral positions.

The CS also identified abuse of social media as another worrying source of concerns on election security and credibility.

He expressed frustrations with the process of prosecuting suspects in social media abuse cases and cited the easy access to bonds as a major drawback to discouraging the vice.

“We have the challenge of multiple bonds issued by our courts. Some of the people who have been arrested are enjoying their eighth, ninth or tenth bond. This of course does little to deter others from engaging an army of bloggers to character assassinate others,” he said.

He said the emergence of digitally-driven crimes and the failure to amend relevant laws on intelligence gathering and prosecution was also giving an escape window to repeat offenders.

Other challenges that the CS identified as risks to a credible poll from a security perspective are a deliberate disregard for laws and regulations, especially on political gatherings, the proliferation of hate speech and incitement to ethnic conflicts and balkanization.

To secure the general election, the CS said at least 10,000 specialised officers had been mobilized and deployed under a multi-sectoral approach involving the police, prison officers and wardens from the Kenya Wildlife and Kenya Forest services among others.

He said more officers and equipment would also be made available to the IEBC on a need basis.

The Government would also work closely with the IEBC and other stakeholders to ensure the election was credibly delivered.

UDA said CSs must be neutral or resign and become official ODM agents.
News
1 month ago

A pistol was recovered from a passenger on on a Moyale bound bus.
News
1 month ago
“WATCH: The latest videos from the Star”
by CYRUS OMBATI Chief Crime Reporter
News
10 May 2022 - 13:53