• Muturi directed the Clerk of the National Assembly Michael Sialai to withdraw the documents and return the same to Gedi at the earliest time possible.

•He said the lawmaker did not follow the laid down rules for the submission of documents. 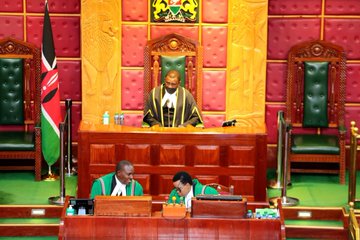 He said the lawmaker did not follow the laid down rules for submission of documents, further calling out the Woman Representative for attempting to discuss Ruto’s conduct through the backdoor.

Muturi directed the Clerk of the National Assembly Michael Sialai to withdraw the documents and return the same to Gedi at the earliest time possible.

“In view of the foregoing, the matter is spent and there shall be no further substantiation or debate on it,” the speaker ruled.

He said the sequence of events is that any member with such claims tables the documents and have the speaker confirm the admissibility.

Gedi had provided documents to the Assembly which she said were evidence incriminating the DP of grabbing land.

A storm erupted in the National Assembly last month as Gedi made the allegations of land grabbing.

Gedi walked into the Chambers with a suitcase of evidence, to demonstrate assertions that Ruto was a land grabber.

During a debate on a petition over land issues at the Coast, linked Ruto to alleged land grabbing some of which she said had been ruled by courts in favour of the victims.

he was thus asked by Speaker Justin Muturi to table the evidence of her claims, which she attempted before the chaotic sittings were adjourned prematurely.

“I have gathered enough material to substantiate my position that we are not safe in the hands of a presidential candidate who has used his influence to intimidate the weak,” she said.

A heated exchange played out between her and the speaker as she sought to table the documents she had carried to the chamber.

Parliament chaos by MPs out to gain bonga points- Muturi

The MP is required to provide proof on Ruto grabbing land.
News
2 months ago
“WATCH: The latest videos from the Star”
by MOSES ODHIAMBO Journalist and Political Writer
News
10 May 2022 - 15:08