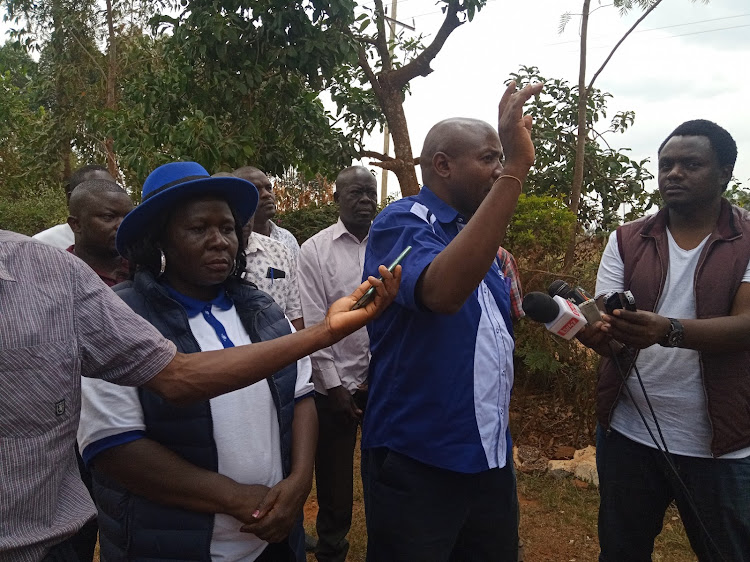 Wangwe said he will support Savula because he has what it takes to succeed Governor Wycliffe Oparanya.

“You have been speaking to my people, not once or twice. You are in Azimio with Barasa (Fernandez). Go ahead, I will support you,” he said.

He said Savula has demonstrated that he can be trusted because he has stood with him in times of need.

Wangwe, who defected to ODM from Jubilee months ago, spoke at a funeral in his constituency on Sunday. Also present was DAP-K woman representative aspirant Naomi Shiyonga.

ODM has fronted Fernandez Barasa as their preferred successor for Oparanya in the governor contest.

The MP said the 30 per cent stake in government negotiated by ANC leader Musalia Mudavadi and his Ford Kenya's Moses Wetang’ula for the Luhya community is meaningless.

“Thirty percent is nothing in government. The only thing Mudavadi can get is a cabinet post," he said.

"Mudavadi is beyond being a cabinet secretary, such seats should be for people like us."

Wangwe said Mudavadi should have bargained for a running mate as the bear minimum in the Kenya Kwanza alliance.

“The grand match to state house was started by former vice president Kijana Wamalwa and we can only realise it through Raila. Let us support him to bring this thing to the lake then we can take it from there,” he said.

Says Wiper leader should accept to work with Raila in any other capacity or leave.
Western - Page 28
3 weeks ago

Savula joins ANC’s Malala, Barasa of ODM, Omukoko of MDG and Jirongo of UDP in the August governor race
Western - Page 28
1 month ago

Parties have until April 21 to conclude nominations of aspirants for the August 9 polls.
News
1 month ago
“WATCH: The latest videos from the Star”
by HILTON OTENYO Correspondent, Western Region
News
09 May 2022 - 22:00