He was scheduled to appear before the panel on Monday at 3pm; four nominees commit to respect outcome

•The interviews for Azimio presidential hopeful Raila’s deputy had a smooth start on Monday, with nominees committing to accept the verdict of the panel. 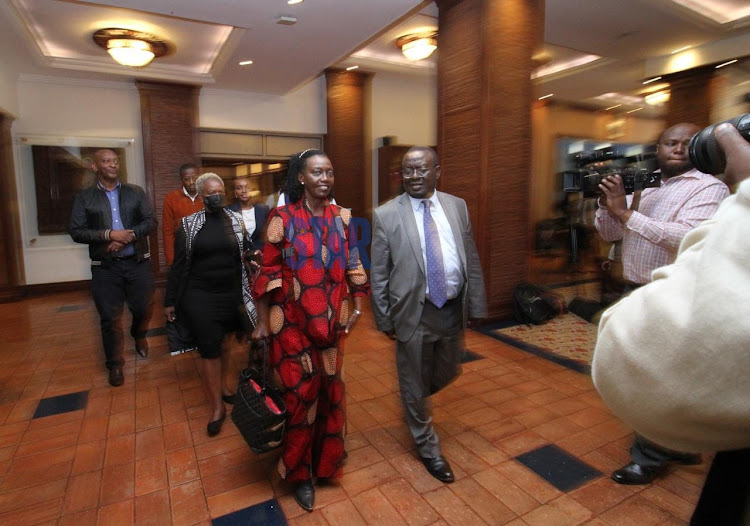 Narc Kenya party leader Martha Karua after an Interview for the Azimio running mate position at Serena Hotel on May 9,2022.
Image: ENOS TECHE

Kanu chairman Gideon Moi failed to appear before the committee of eminent persons on the selection of Raila Odinga’s running mate on a day the panel questioned five nominees for the job.

Moi bolted out at a time Kalonzo had signalled snubbing the panel over what his camp terms public humiliation of the Wiper leader, who has twice been Raila’s running mate.

However, Kakamega Governor and ODM deputy party leader Wycliffe Oparanya, who is among the 11 shortlisted candidates, hit at Kalonzo saying snubbing the team is a demonstration of disrespect to established institutions.

The 10th vice president is scheduled to appear before the panel on Tuesday ahead of the submission of the list to Azimio la Umoja One Kenya presidential candidate. His camp has rejected such an arrangement.

Kanu secretary for political affairs Fred Okango said the senator ceded his nomination given his camaraderie with Kalonzo.

Moi was scheduled to appear before the panel on Monday at 3 pm.

“Our national chairman was for some reason shortlisted to appear before the panel. We have received instructions from him that he will not be appearing,” Okango told journalists at Serena, the venue of the vetting.

“He is suitable, capable to be Raila’s running mate, but on this one, he is not going to appear having endorsed Kalonzo,” he added.

The interviews for Raila’s deputy had a smooth start on Monday with nominees committing to accept the verdict of the panel.

Four of the 11 shortlisted nominees appeared before the vetting team chaired by former Kwanza MP Noah Wekesa for an exercise that lasted almost one and half hours for each of the candidates.

Murang’a Woman Representative Sabina Chege was the first to face the committee.

Nakuru Governor Lee Kinyanjui was the last to appear.

The panel has up to midnight on Tuesday to submit the names of the top three candidates to Raila.

Speaking to journalists after the exercise, the candidates vowed to support whoever will be picked.

“I leave it to God and I know my chances are high. I will respect the outcome of the panel and thank God that my name was featured on the list. It is not a mean feat. It is a lot of respect,” Sabina said.

The Murang'a MP described the atmosphere at the panel as cordial and more of a friendly conversation as opposed to a job interview.

“The panellists just wanted to know about me and what strength I will add to the candidate and the energy I bring to Raila’s team. I’m a young person and I address the gender equation in his camp,” Sabina said.

“In Mt Kenya, we have a rich vote basket, which is vital to propel Raila to the presidency. Having been in active politics for the last 10 years, I think I have the experience to serve. I have local and international connections.”

She defended her candidature as that which will appeal to restive Mt Kenya and ensure the former Prime Minister gets a share of the vote-rich Central Kenya.

Joho, whose candidature alongside that of Oparanya raised eyebrows given both are members of Raila’s ODM party, exuded confidence in getting a fair hearing before the panel.

Raila arrives at Serena as interviews for Azimio deputy start

Raila did not, however, speak to the media even after being prompted to do so by reporters.
News
7 months ago

It wasn't an interview, Chege says after facing Azimio panel

"Despite the outcome, I will stand with Azimio and keep supporting Raila."
News
7 months ago