He says a child's self drive and discipline will deliver good results in any school.

• Magoha noted that all form one students should report to the school they were placed in unless there are special circumstances such as medical or others.

• The CS urged parents urged the parents to stop keeping their children home, thinking that they will be taken to other schools. 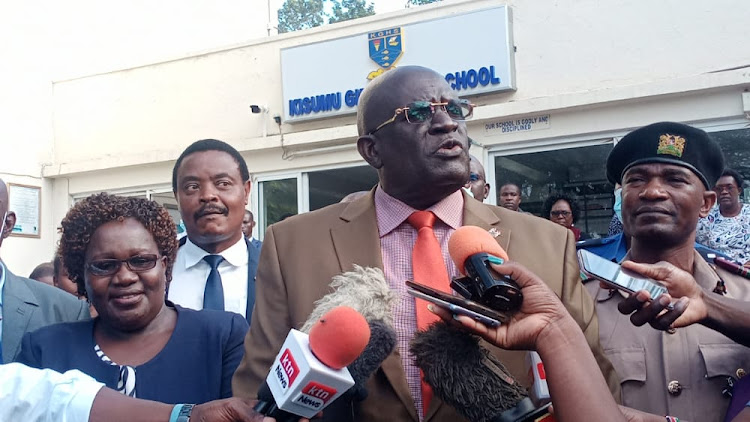 Education CS George Magoha has instructed school heads not to effect the transfer of Form Ones.

He said all Form One students should report to the schools they were placed in unless constrained by special circumstances such as medical condition.

"What will determine a child's performance is most importantly the child's self drive and descipline," he said.

The CS noted that Form One reporting in schools was still very low.

Magoha urged parents to stop keeping their children at home in the hope that they will be taken to other schools.

"Stop keeping the children home because you think they are going to be taken to another school that's not going to happen," he said.

The CS pointed out that middle class families are the most persistent in trying to get their children into different schools from the ones they were placed in.

"If you are a middle class and you are not happy where your child has been taken, please take them to private schools and pay school fees for them," Magoha said.

"Stop destabilizing the government system which is actually efficient."

Magoha was speaking when he visited Kisumu Girls high school on Saturday.

The CS noted that every Kenyan school is well funded and capitation for every child is paid to the same level.

Magoha further stated that all the children should go to school and be sure that they are going to be received.

"We are going to work quickly to identify those extremely poor. For the parents who don't have enough money, send your child with the money that you have as you look for the rest of the money."

Form Ones will join their respective secondary schools on May 4.
News
2 months ago

Form One selection: How candidates have been placed

Magoha said their selection was based on affirmative action and was purely on merit.
News
2 months ago
WATCH: The latest videos from the Star
by FAITH MATETE
News
07 May 2022 - 17:55