The county government wants to relocate the schools to the outskirts of Kisumu City.

• Debate over the relocation of the schools from the city centre has been ongoing since last year.

• Governor Anyang Nyong'o revived the debate this week while in Nairobi saying that the current location of the two institutions did not align with the plan to make the lakeside city a commercial hub. 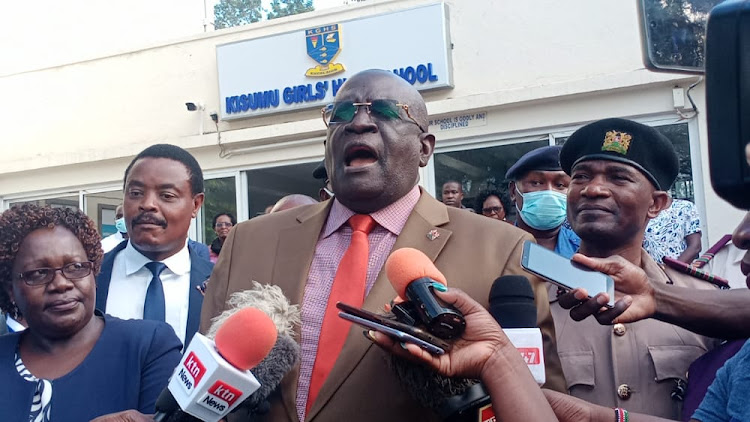 The Kisumu County government is mulling over relocating the schools from the city centre to the outskirts of the lakeside city.

But Magoha says learners at the twin schools are safe in their current locations.

"So do not scare my students. Every child in this school is as safe as the other one," he said.

Debate over the relocation of the schools from the city centre has been ongoing since last year.

Governor Anyang Nyong'o revived the debate this week while in Nairobi saying that the current location of the two institutions did not align with the plan to make the lakeside city a commercial hub.

He added that the schools sit on prime land within the Central Business District but do not bring any economic value to the development of the city.

Bur Magoha said any such move would require public participation.

"This is because if you want to relocate schools anywhere else, you will have to ask the people around there," Magoha said.

He spoke on Saturday at Kisumu Girls High School.

The debate on the relocation of the schools had last year been met with  resistance from locals and the alumni.

The president of the Kisumu Boys school Alumni association, lawyer James Mwamu, threatened to go to court over the matter.

The association noted that the decision was ill-advised and it did not make economic sense that two iconic schools would be replaced with hotels and malls.

Mwamu said the schools are historical monuments as they were built during the era of the Kenya-Uganda Railway.

"When writing the history of Kisumu, you cannot do so without the mention of the two schools and we call upon the residents to reject this move," Mwamu said.

He said if the county needed to construct malls and hotels, it should look for land elsewhere and not within the two schools.

The alumnus said the schools serve local residents and students from nearby areas who go to school on foot, by bicycle or even use public transport.

"Relocating them to the outskirts of town would deprive thousands of parents and students of affordable and accessible schools," Mwamu said.

The alumni association vowed to resist the move at all cost.

Mwamu said the association had sat and agreed to reject the move in totality.

Kuppet has also rejected plans to relocate the schools.

In a statement, Kisumu county Kuppet executive secretary Zablon Awange said that attempts by the governor to relocate the schools lacks legal basis, is a misplaced priority and will be rejected by stakeholders

"As a union we will reject this misplaced priority and advice the governor there are key issues affecting education in Kisumu county that has been neglected by political leaders in Kisumu," Awange said.

"We demand the county govt cease this stormy topic until all stakeholders have discussed it but the public opinion is that Kisumu boys and girls are going nowhere," he added.

Principal cites incidents where parents confuse schools and pay fees to wrong accounts
Counties
2 years ago
WATCH: The latest videos from the Star
by FAITH MATETE
News
07 May 2022 - 15:52