He said the panel had unanimously agreed on seven names for Raila running mate.

• For the sake of the integrity of the process of picking Riala running mate and the preservation of the dignity of members of the panel, then the seven names excluding Ngilu’s should remain. 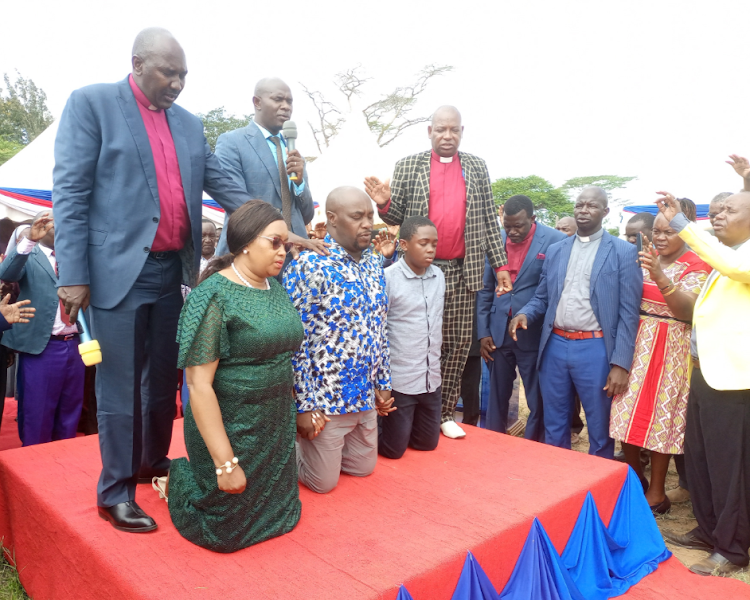 AIC Bishop Joshau Kimuyu and fellow clergymen praying for Kitui Senator Enoch Wambu and his family during a function at Kyondoni Primary school in Kitui West subcounty on Saturday, May 7, 2022.
Image: MUSEMBI NZENGU

Cracks have emerged in the seven-member panel to pick the Azimio presidential running mate after Kitui Senator Enoch Wambua threatened to quit the team.

Wambua said seven names were unanimously picked during Friday´s sitting but Ngilu´s name was later included on the shortlist.

Wambua said he would rather exit the panel instead of allowing underhand deals and behind the scene maneuvers that are not in realm with the mandates of the team.

“What the presidential candidates asked the panel to do is to get him a suitable deputy who will help him win the elections not considering friendship, emotions activism, which will not help in winning election,”  the senator said.

On Friday, the panel released a list of seven names which it said it had shortlisted from 20 applicants who showed interest in deputising Raila Odinga.

Shortly afterwards, the panel leased another amended list with the NARC leader as the eighth selected candidate.

But Wambua said he believes in justice, magnanimity and the truth and he was not a man to be compromised or be bought.

“If I interrogate the panel and establish that we have just been put there to rubber-stamp a pre-determined decision that is not good and suitable, take it from me, I as Enoch Kiio Wambua I will easily resign from the outfit,” Wambua said.

He made the remarks at Kyondoni Primary school in Kitui West subcounty.

While addressing church leaders drawn from various parts of Kitui, local christian faithful and coordinators of his campaigns, Wambua said that since the seven names were agreed by all members, for the purpose of integrity of the process and the dignity of the members of the panel, no name should have been added.

He said he will quit to allow those who have a sinister agenda to continue with their work.

“The truth of the matter is that if Kalonzo Musyoka will not be deputy president on August 9 this year, then take it to a safe bank that even Raila Amolo Odinga will not be president,” he added to wild cheers from the crowd.

Backed by Kitui East Wiper Party parliamentary aspirant Miltonic Mwendwa, the legislators emphasized that the only way for Raila to win the presidency is by having Kalonzo as his deputy.

The panel received 20 applications for the post.
News
2 weeks ago

Panel now says meeting would only be available for those wishing to give a presentation before the team.
News
2 weeks ago
WATCH: The latest videos from the Star
by MUSEMBI NZENGU News Correspondent
News
07 May 2022 - 18:22