Unnamed officials said Ukraine had asked the US about a ship sailing to the south of Odesa.

•Unnamed officials said Ukraine had asked the US about a ship sailing to the south of Odesa.

•The sum is more than twice as much as the US has already spent on providing military equipment and humanitarian aid. 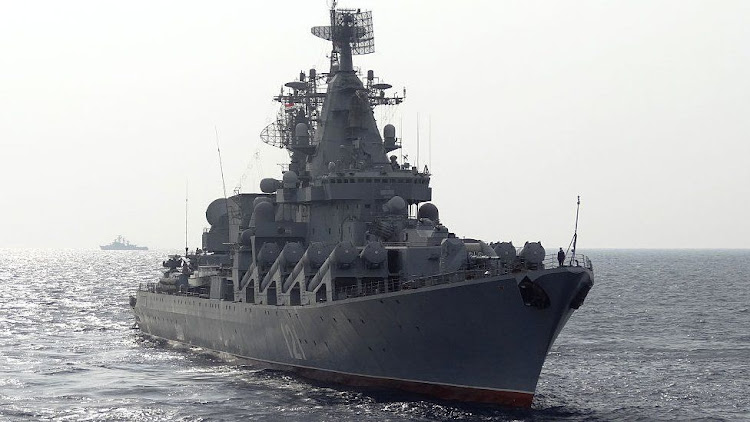 The Moskva patrolling the Mediterranean Sea off the coast of Syria
Image: BBC

Unnamed officials said Ukraine had asked the US about a ship sailing to the south of Odesa.

The US said it was the Moskva and helped confirm its location. Ukraine then struck it with two missiles.

The Pentagon has not commented. But a spokesman said the US gave intelligence to help Ukraine defend itself.

The unnamed US officials quoted in media reports said they did not know that Ukraine would target the Moskva after helping determine its location.

The 510-crew missile cruiser had led Russia's naval assault on Ukraine, and its sinking was a major symbolic and military blow.

At the time, the Russian defence ministry said ammunition on board the Moskva exploded in an unexplained fire and the ship tipped over while being towed back to port.

The US is yet to directly address the reports about the Moskva.

However Pentagon spokesman John Kirby denied earlier media reports that the US was providing information about the locations of senior Russian generals on the battlefield, so that Ukrainian forces could kill them.

"We do not provide intelligence on the location of senior military leaders on the battlefield or participate in the targeting decisions of the Ukrainian military," he said.

Mr Kirby said Ukraine combined information that the US and others provided with their own battlefield intelligence.

The Biden administration is ramping up support for Ukraine. President Biden has asked Congress for $33bn (£27bn) in military, economic and humanitarian assistance to support Ukraine, while insisting that the US was not "attacking Russia".

The sum is more than twice as much as the US has already spent on providing military equipment and humanitarian aid.

The BBC's North America Editor Sarah Smith says Mr Biden wants to show he is undeterred by vague threats about the possible use of nuclear weapons, and a warning from Vladimir Putin that there could be retaliatory strikes against countries that intervene in Ukraine.

Russia's foreign ministry has said Western military support for Ukraine threatens "the security of the continent".

The US has said there could be sanctions if Russia were to attack.
News
1 year ago

The sanctions bar the targeted individuals from entering Russia indefinitely.
News
8 months ago
WATCH: The latest news from around the World
Post a comment
WATCH: The latest videos from the Star
by BBC NEWS None
News
06 May 2022 - 11:14
Read The E-Paper