• City planner Judy Bala said matatus and buses will be directed away from the CBD to Uhuru Business Park Complex.

• She said the changes are temporary, but they will not quickly revert back to the old routes even after the Africities conference. 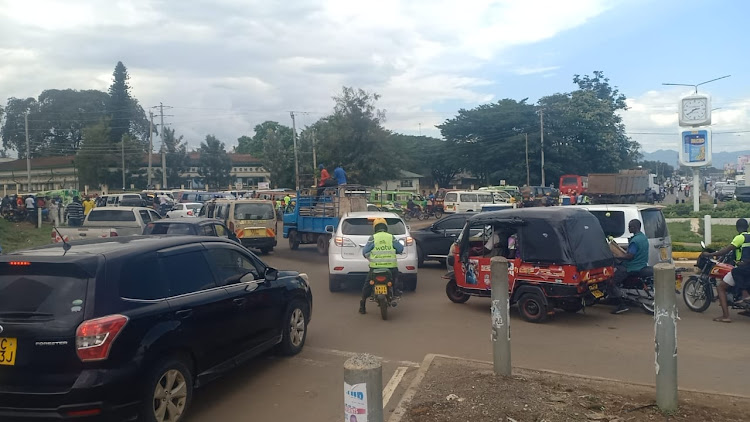 Motorists at the Patel roundabout in Kisumu on May 6, 2022.
Image: FAITH MATETE

The Kisumu County government on Friday started reorganizing traffic flow to decongest the Central Business District ahead of the Africities Summit.

More than 3,000 investors are expected to attend the the 9th edition of the Africities conference between May 17 and 22, 2022.

City planner Judy Bala said matatus and buses will be directed away from the CBD to Uhuru Business Park Complex.

Bala said it was necessary to reorganize the flow of traffic so that investors attending the conference won't encounter congestion.

Under the new changes, private vehicles are being redirected to use the Jomo Kenyatta Highway to Uhuru Business Market as opposed to using the Nyerere Road.

All town service vehicles are being directed to go through Patel's roundabout to Mamba and stop at Taifa Park.

Bala said that all vehicles from Nairobi will use Kachok flyover, Ondiek highway, join Gumbi Road then head to the bus park.

She said the changes are temporary, but they will not quickly revert back to the old routes even after the Africities conference.

According to the city planner, the long term plan is to construct bus parks at various places outside the city like the one in Nyamasaria area.

Following the new changes, travelers are forced to walk some distance to board public transport vehicles to their destination.

"Even though this is something new, I know we will get used to it, it's also an exercise for us today," Martha Ochieng said.

However, John Mark said it was a challenge since most of them still don't know the location of specific bus parks.

Chairman of the CBD town service, David Odhiambo, lamented over the changes saying they were not consulted.

He, however, said they were not disputing the changes but proper planning should have been done.

"This place we are in now, there are no toilets and water, even structures where people can use as shelters when it rains are not there," Odhiambo said.

"We ask the governor to sit down with his team and look for an alternative conducive place to settle us," he added.

Preparations in top gear to host Africities in Kisumu

Among facilities targeted for face-lift include Ofafa Memorial Hall.
Counties
4 months ago

Investors urged to take advantage of the conference to improve existing facilities and develop new ones
Counties
1 year ago
WATCH: The latest videos from the Star
by FAITH MATETE Correspondent, Kisumu
News
06 May 2022 - 19:57