Nairobi, Nakuru, Turkana, Kakamega and Mandera get the lion's share

In Summary
by JULIUS OTIENO Journalist, Political and Parliamentary Reporter
News
03 May 2022 - 23:00 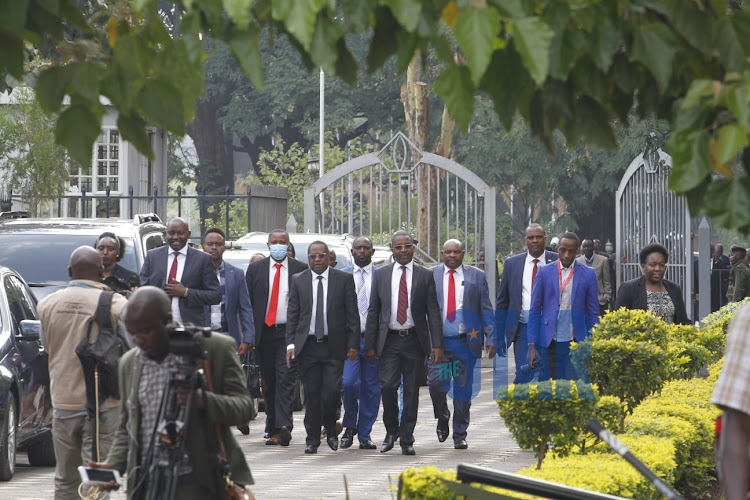 Council of Governors arriving at the Parliament Buildings on April 25, 2022
Image: ENOS TECHE

The new crop of governors to be sworn in after the August 9 General Election will control over Sh400 billion.

The governors will have at least Sh407.1 billion at their disposal comprising Sh370 billion in equitable share and Sh37.1 billion in grants.

The revelations are contained in the County Allocation of Revenue Bill, 2022.

The bill details how the 47 counties will share the Sh370 billion from the exchequer.

“The principal object of this Bill is to make provision for the allocation of revenue raised nationally among the county governments for the financial year 2022-23,” the Bill states.

The proposed law is sponsored by the Senate’s Budget and Finance Committee chaired by Kirinyaga Senator Charles Kibiru.

It has been introduced in the Senate for first reading.

According to the Bill, the incoming Nairobi governor and his Nakuru, Kakamega and Turkana counterparts will control the highest amounts.

The governor’s seat in the counties has attracted stiff competition with various parties and coalitions scheming how to win them.

In Nairobi, giant coalitions – Azimio and Kenya Kwanza – have zoned the area, only fielding one candidate each to consolidate their votes in a bid to improve their chances of winning.

Azimio has picked former deputy governor Polycarp Igathe for the position and prevailed on all other aspirants to drop their bids.

In Nakuru, the race is tight between incumbent Governor Lee Kinyanjui of Jubilee (Azimio) and UDA’s Susan Kihika (Kenya Kwanza).

Nakuru was recently elevated to a city.

In Kakamega, ODM will square it out with an ANC candidate in the race to succeed outgoing Governor Wycliffe Oparanya.

Mandera, Kiambu, Kilifi, Kitui and Bungoma are the other counties that will get at least Sh10 billion in the next financial year.

Mandera, where at least four aspirants are seeking the governor seat, will get Sh11.19 billion while Kiambu has been allocated Sh11.71 billion

Kilifi county whose top seat is being battled by ODM’s Gideon Mung’aro and UDA’s Aisha Jumwa will get Sh11.64 billion.

Bungoma, where Azimio candidate and incumbent Wycliffe Wangamati faces Kenya Kwanza’s Kenneth Lusaka, will get Sh10.65 billion while Kitui has been given Sh10.39 billion.

The funds have been shared in accordance with the third basis of division of revenue passed in 2021 after months of a standoff in the Senate.

“For the avoidance of doubt the allocation of the equitable share of revenue to county governments under Section 4 of this Act shall be in accordance with the third determination of the basis of the division of revenue among counties approved by Parliament pursuant to Article 217 (7) of the Constitution,” the Bill reads in part.

In the formula, Sh158 billion out of the Sh370 billion total allocation are shared equally among the 47 counties with the balance of Sh211 billion being subjected to the various parameters.

They include health, population, agriculture, poverty level and land size.

The grants have been provided for in a separate Bill.

by JULIUS OTIENO Journalist, Political and Parliamentary Reporter
News
03 May 2022 - 23:00