Atwoli on Saturday said the function will be purely about workers.

•Uhuru arrived about 10:20 am in his convoy and was ushered to the VIP dais by Cotu secretary general Francis Atwoli.

•The celebrations will be his last considering that he will be exiting office after the August 9, polls. 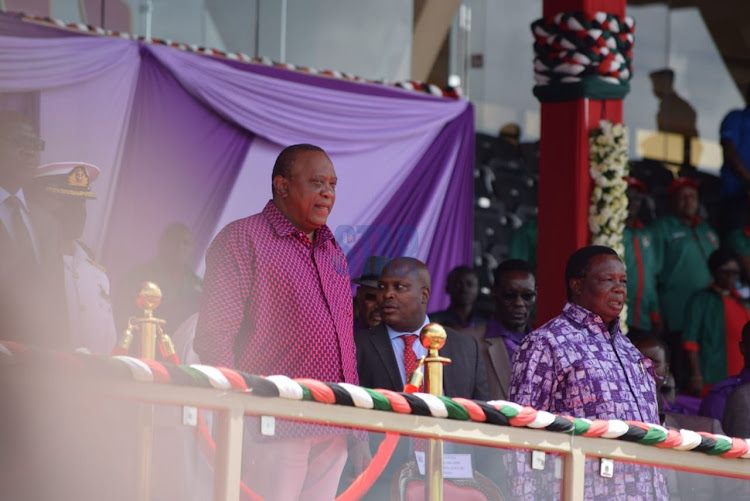 The President arrived at about 11:20 am in his convoy and was ushered to the VIP dais by Cotu secretary general Francis Atwoli.

The celebrations will be Uhuru's last considering that he will be exiting office after the August 9, polls.

Deputy President William Ruto and ODM leader Raila Odinga are yet to arrive at the stadium for the celebrations.

The two leaders, however, shared their tributes to the Kenyan leaders on their social media handles.

In his message, Ruto acknowledged the important role the Kenyan workers have impacted the economy saying they have made the country what it is.

"To workers and hustlers: We recognize your toil, sweat and hard work. You are the reason that Kenya is where and what it is today. You are the engine to get us there. God bless you," he said.

On his part, Raila also shared similar sentiments to that of the DP regarding the building of the nation.

Raila went further and pledged workers equitable pay in his administration in the event he is elected President in the August 9 polls.

"A nation is nothing without a workforce that feels fulfilled, secure, and appreciated. The Azimo administration will ensure that all Kenyans will receive adequate pay for their efforts to ensure their dignity is upheld. Happy Labour Day" Raila said.

Atwoli on Saturday said the function will be purely about workers.

The celebrations come at a time when Kenyans are witnessing a sporadic rise in the prices of basic commodities.

Most Kenyan workers are also facing a salary increase freeze.

Many employers have lamented over the tough business environment occasioned by the Covid-19 pandemic effects as the reason why they can't offer a salary rise to their workers.

Uhuru is expected to lead the celebrations at Nyayo Stadium.
News
3 months ago
“WATCH: The latest videos from the Star”
by BOSCO MARITA Digital Sub-Editor
News
01 May 2022 - 11:32