I remain firmly in ODM and Azimio-OKA coalition, he said.

• This comes after Kenya Kwanza Alliance gubernatorial candidate Johnson Sakaja claimed that they were in talks to work together ahead of the August 9 polls.

• " I remain firmly in my party ODM and Azimio la Umoja One Kenya." 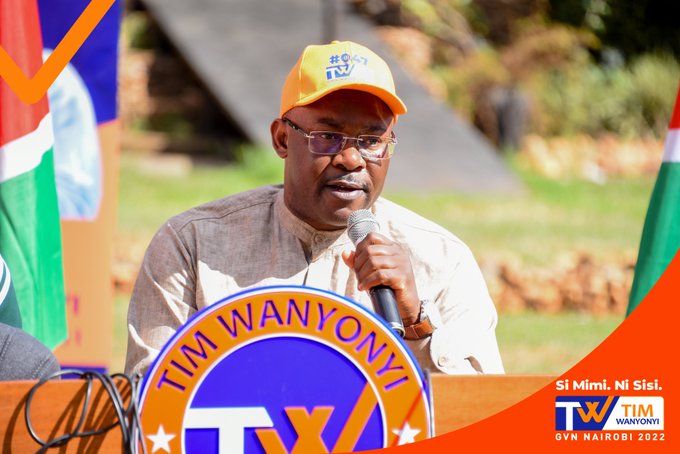 Hot on the heels of speculations regarding his political future, Westlands MP Tim Wanyonyi now says he is firmly in the ODM party and the Azimio la Umoja One Kenya Alliance Coalition.

This comes after Kenya Kwanza Alliance gubernatorial candidate Johnson Sakaja claimed that they were in talks to work together ahead of the August 9 polls.

In a video he shared on Twitter, Wanyonyi said that he will be defending his MP seat.

"I am ready to serve the people of Westlands for the third time and I remain firmly in my party ODM and Azimio la Umoja One Kenya. To all my supporters thank you for believing in me, the dream lives on," he said.

This is the first time Wanyonyi is making his political stand known since the Azimio gave its Nairobi governor seat ticket to Jubilee's Polycarp Igathe.

After being elbowed out of the governor's race, the MP embarked on giving mixed signals on his political future.

Being pictured with Sakaja on the day he stepped down and later issued statements on social media that ostensibly suggested he was rethinking his political future brought confusion of some sort among his supporters.

The legislator has, however, refuted the claims by saying his leadership philosophy has always been about the people and it will remain to be just that.

"Leadership has been about serving people. This has been my philosophy for the past 15 years and I'm confident it shall remain so. As I have said before, it has never been about me, it shall never be about me. it will always b about the people. Si mimi ni sisi."

Speaking at the Hustler Centre on Wednesday after receiving his UDA party nomination certificate, Sakaja said he had met with the legislator on several occasions.

He added that their teams were still discussing the modalities of working together ahead of the August 9, polls.

He said despite their political differences, they have agreed to unite for the common course of ensuring their agenda is delivered to the people of Nairobi.

“From the polls and statistics, he was my closest competitor but when we sat together after he was replaced by someone else, I sympathised with him and agreed to work together,” Sakaja said.

“Our teams are working together and more details will be out in due course. The vision for our great county and having what is in your heart done is important.”

Speaking to the Star after the meeting, Sakaja said that they met with an aim of working together.

"We just met to consult as brothers after the decision they made. That is what happened. I am looking forward to working together with him. What we have realised is that we have the same vision, and that is more important than anything else," Sakaja said.

However, a close source to Wanyonyi told the Star that the meeting was not predetermined.

"We just bumped into each other. The meeting was not planned. You heard what was announced today, Tim Wanyonyi is yet to speak so we have to give him time to do so. As far as I am concerned, he is still in the Azimio," the source, who sought anonymity told the Star.

Has spoken with Westlands MP regarding working together ahead of General Election.
News
3 months ago

The meeting comes after MP Wanyonyi stepped down for Igathe.
News
3 months ago
“WATCH: The latest videos from the Star”
by BRIAN ORUTA Digital Journalist
News
28 April 2022 - 08:45
Read The E-Paper