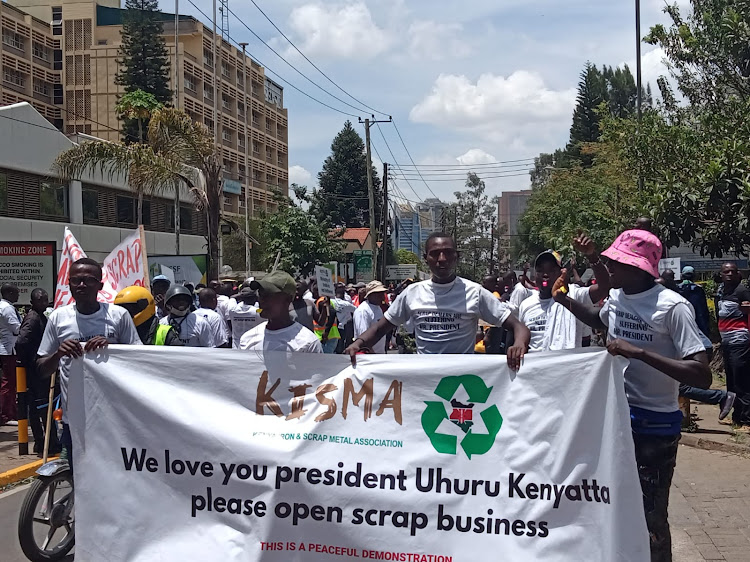 SCRAP THE BAN: Scrap metal dealers protest on the sector ban and increased taxes at Nairobi on April 12
Image: HANDOUT

President called it the theft "nothing less than economic sabotage, which is treasonous".

A number of legal experts disagree with the "treason" label. They say it's doubtful the president has the power to abruptly close an economic sector, hurting many people, without wide public participation.

Now, the government has called for regulated trade and regulations to involve stakeholders and fresh licensing.

The government has said its ban on scrap metal trade has saved the country Sh3 billion in damages to critical infrastructure.

The Ministry of Industrialisation, and Trade told the National Assembly in a report that the moratorium had reduce Sh3 billion damage caused by vandals to infrastructure.

The report was tabled in Parliament on April 6 by Dagoretti South MP John Kiarie who requested a statement from the ministry regarding the ban.

The moratorium was to be in effect until the government put in place regulations to control the sourcing, trade and export of scrap metals.

In the report, the ministry said the government plans a meeting of stakeholders, the public and private sector to review the Draft Guidelines for the scrap metal trade.

No date was given.

“It is in the interest of all stakeholders that all persons and businesses handling scrap metal are licensed," it read.

"They should use business membership organisations for initial vetting of members. As you may recall, proper guidelines were a pre-condition for lifting the moratorium,” the report read.

In response, Kikuyu MP Kimani Ichung’wah said it was ironic for the ministry to say it is working on guidelines when there is already an existing law regulating the scrap metal business.

“The illegal ban by the President and the Cabinet Secretary is something that we should not accommodate. What guidelines do we need other than what is already established in law?” he asked.

The ministry said a multi-agency team has been constituted to do fresh vetting of all fresh applications for licences.

“Those already licensed [will] have their licences renewed in order to streamline the scrap metal trade,” it said.

The multi-agency team includes the Ministries of Industrialisation and Trade,  the Scrap Metal Council, the National Police Service, the Kenya Power and Lighting Company, the Kenya Railways Corporation, the Directorate of Criminal Investigations , and the national Government administration.

No one is holding export licenses at this time, the report read.

“All licences expired and exporters are all applying. They are being processed.

"Fresh vetting will be undertaken by a multiagency team for licensing. Since imposition of the moratorium, 59 businesses have applied for licences, seven of them for export licenses," the report read.

In January, a breakdown at Kenya Power’s transmission line caused a blackout that affected customers across the country.

The outage was attributed to a vandalism that caused a tower on the Kiambere-Embakasi high voltage transmission line to collapse.

On February 8, the government announced it is planning to lift a the scrap metal ban, which caused an uproar.

Interior CSFred Matiang’i said the ban will only be lifted and they will only be allowed to do business if dealers apply for fresh licences and join associations.

Scrap metal, the President and treason

Suspects sabotage efforts of KPLC by removing transformer fuses shortly after they leave.
News
2 months ago
“WATCH: The latest videos from the Star”
by ALLAN KISIA Political Writer
News
15 April 2022 - 23:00