Coalition agreement be inked with other parties next week.

•Rutto said they were unable to travel to Nairobi to sign with other parties as they were held up with nomination preparations.

• CCM boss says party is fully in CCM, says other parties had conditions for joining, but they have done and are fully behind DP Ruto. 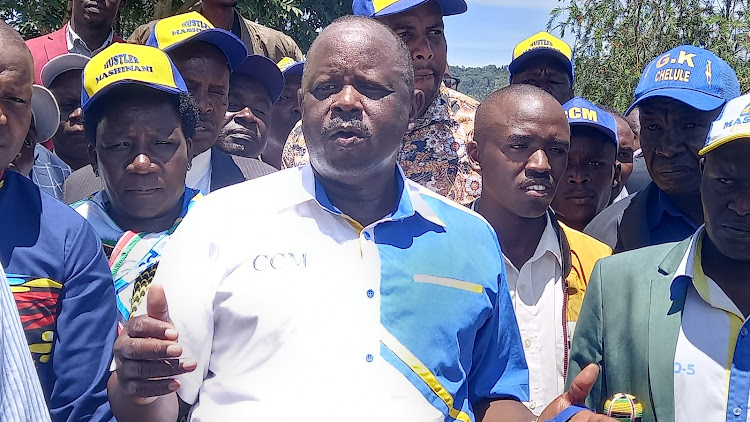 He dismissed as "falsified" reports that CCM had been snubbed during the signing of the Kenya Kwanza pact last week, hence, it wasn't present during signing by other parties.

Rutto told the press in Bomet that CCM is fully in the coalition.

He spoke during a meeting with aspirants from the party ahead of the planned nomination exercise on Tuesday next week.

Rutto explained they were not able to travel to Nairobi last week to sign the coalition agreement alongside other parties as he and other officials were held up organising  logistics for the exercise.

The county chief also said CCM was not the only party that did not sign the Kenya Kwanza coalition agreement with the other 12 political outfits.

“We were not left out as some people might want to portray us," Rutto said.

"We are in and we are going to be signing our pact next week with other parties that are yet to sign, when we are done with the nominations,” the CCM boss said.

He said they are in talks with Kenya Kwanza to fix a convenient day for all other parties to formally sign in compliance with the Registrar of Political Parties’ requirement.

Rutto also said most parties that signed their agreements last had "protracted" issues as part of their conditions to join something he said was not in their initial bargain to join.

“For us, we were joining Kenya Kwanza, and more so agreeing to support Deputy President William Ruto for the presidential seat unconditionally. We are not interested in any seats, positions or favours in return," he said.

Rutto who is eyeing the Bomet governor's seat on his party's ticket also announced CCM has put in place measures for a smooth nomination exercise.

He said they have printed sufficient ballot papers and do not foresee a situation in which the nominations might be tampered with.

“Ballot materials will be distributed in the morning as compared to night, Rutto said.

"This will avoid a situation as witnessed in UDA's exercise in Bomet. Papers for some constituencies and polling stations were destroyed by rowdy youth."

The two Rutos have had a love-hate relationship since the 2017 polls.
News
1 month ago