FIRST OF ITS KIND

Joy as heart valve is replaced without surgery

Patil says Carlo’s operation is good news for the medical fraternity in the country.

• Carlo had been diagnosed with a heart condition called aortic stenosis, in which the aortic valve struggles to open.

• Aortic stenosis occurs when the heart is unable to pump blood through the narrowed valve. 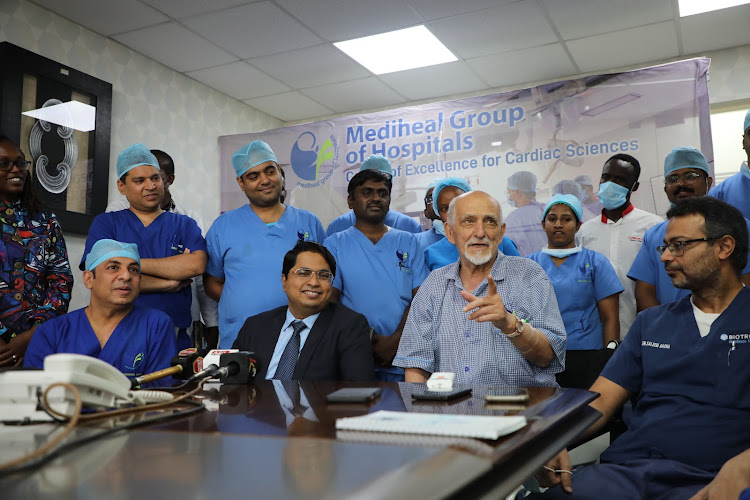 Earlier this year, Father Brambilla Luigi Carlo lost his breath as he went uphill and thought it was due to old age and lack of exercise.

“Instead of resting, I forced myself to go uphill but I was completely out of breath. I lay down and two women saw me and helped me go home,” Carlo narrated on Monday at Mediheal Hospital in Nairobi.

When he reached home, he checked his blood pressure and it was 80 over 60.

A week earlier, he had done 10km walk in a flat area.

“Even then, it was a little difficult,” he said.

Worried and confused, Carlo called a doctor to find out what was going on.

“I was told it could be heart failure,” he said.

Carlo said while at the hospital, he was attended by chief interventional cardiologist and director cardiac programme Dr Vijaysinh Patil.

“They found that the heart valve was not working. They did not admit me immediately because there was preparation to be done. I waited for one month and then I came for the operation,” Carlo said.

Carlo had been diagnosed with a heart condition called aortic stenosis, in which the aortic valve struggles to open.

Doctor Patil said, “We did echocardiography on him which confirmed aortic stenosis with impaired heart pumping. So considering his age and heart pumping, we offered him percutaneous transcatheter aortic valve replacement.”

There are four valves within the heart.

These valves open to allow blood to flow through the heart and close to stop blood flowing backwards.

One of these valves is called the aortic valve.

When open, the aortic valve allows the flow of oxygenated blood from the heart into the aorta, the major artery that supplies the rest of your body.

Aortic stenosis occurs when the heart is unable to pump blood through the narrowed valve.

This causes breathlessness and chest pain.

Some people may experience dizzy spells when exercising, which may lead to fainting.

The restriction and extra force required to pump blood causes strain on the heart muscle.

This can lead to fluid in the lungs, swollen ankles and eventually heart muscle weakness.

If untreated, aortic stenosis usually gets worse over time.

Patil, who leads a team of 20 surgeons, said Carlo’s operation is good news to the medical fraternity in the country.

“As Mediheal in Parklands, we have done one case which is rare and new to this continent. It is called transcatheter aortic valve implantation (TAVI) procedure,” Patil said.

TAVI is a treatment for aortic valve disease where a new valve is inserted inside the narrowed valve.

Patil said Carlo was not willing to have open-heart surgery because of the high risks involved.

He said the new procedure requires special training and experience.

Patil said the procedure was done through the right groin, the femoral artery by inserting a large tube.

“We mounted on balloon navigator system and implanted at aortic valve level after pre-dilatation with 23mm mammoth balloon. We implemented 29mm Myvalve balloon expandable aortic valve at an accurate position similar to what we do during angioplasty,” Patil explained.

He said the new procedure is less invasive as the chest is not opened.

“You can see the patient smiling and walking. He is comfortable,” Patil said.

Carlo’s operation lasted one and half hours. The procedure started at 9.30am and ended at 11am.

Open-heart operation takes about two and a half hours and can take up to seven days to heal.

Patil said, however, not everyone is suitable for the procedure.

The doctor said the procedure, like any medical procedure, has risks.

Patil said during the procedure, the patient is conscious and can talk.

The patient can be discharged three days after the procedure.

Carlo said he hopes to engage in physical exercises again.

“I will practice by walking for a certain period and wait for further instructions from the doctors,” he said.

He said patients who need cardiac procedures, transplant and advanced surgery are no longer going outside the country.

"We are emerging as the next best alternative to Turkey and India," Kumar said.

The defect limits blood flow out of the heart and into the rest of the body.
News
5 months ago