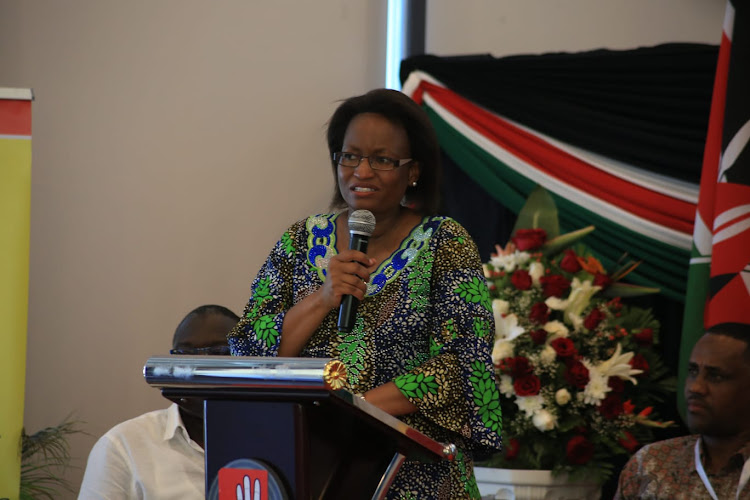 Health PS Susan Mochache addressing the audience during the the official opening of a dialogue on The Triple Threat at English Point Marina hotel in Mombasa on Thursday
Image: John Chesoli

Between January and February this year, Kenya recorded a total number of 45,700 early pregnancies among adolescent girls across the country.

Early teenage sexual activities have also led to an increase in new HIV infections among teens in the country.

In January and February this year, Kenya has recorded 98 new cases of HIV every week among girls aged 10 and 19 years.

This is an improvement compared to more than 343 new HIV cases every week among young girls that were reported in 2015.

The National Aids Control Council with the support of the national government on Thursday launched an initiative to end new HIV infections, Gender-Based Violence , and early pregnancies among young girls.

The program is dubbed, ‘Triple Threat.’

The National Council for Population and Development Mohammed Sheikh said that 30 per cent Kenyan population are youth who are facing big threats.

“Apart from the use of drugs and substances, youths are facing threats of GBV, new infections of HIV, and early teenage pregnancy,"Sheikh said.

"We view the Triple Three as an economical developmental issue and that is why we are going to work with county commissioners to put all this to an end.”

He said that Kenya needs to harness its demographic dividend because it has a youthful population that will be there in the next few years.

He said the government must end any threat facing the youthful population.

She said that the amount is usually raised through the support of partners.

Right now,she said, the government is struggling to see where it can get physical space to ensure that everybody is in treatment.

“It will be self-defeating for us not to stop new HIV infections because without doing that, we are not going to sustain the HIV response as a country,” she said.

According to a report issued by the Ministry of Health, in 2018 Kenya had a total of 427, 135 cases of teenage pregnancies cases reported at antenatal clinics.

Health Principal Secretary Susan Mochache said that despite the number of teen pregnancies still being high, they have reduced by 26 per cent to 317,644 cases in 2021.

“In 2021, we made great achievements in reducing the teen pregnancies numbers in Kilifi, Taita Taveta, and Siaya  by more than 50 per cent,"she said.

"This is because of our focus and collaboration with other partners.”

Mochache said that by working together with partners, Kenya has made strides towards ending Aids as a public health threat.

Between 2013 and 2021, HIV programmes have yielded a 67 per cent decline in the annual Aids-related deaths.

She said that there has been an increase of 83 per cent of people living with HIV that are on life-saving antiretroviral treatment, from 600,000 people in 2013 to 1.2 million people in 2021.

Mochache said that although cases of sexual and gender-based violence are still high, efforts to stem the vices can make Kenya a safer country where girls and women live without fear of being robbed of their dignity.

“In 2021, we received 12,520 cases of SGBV. We were able to provide preventive services to 4,664 of these young survivors but unfortunately, 53 of them had acquired HIV disease,” she said.

She said that while acknowledging the progress, the ministry is still concerned that every week, 98 girls aged 10 to 19 are newly infected with HIV.

Between January and February this year, 2,196 cases of sexual gender-based violence were reported among girls aged 12 to 17 years.

“Kenya has a predominantly young population with 67 per cent aged below 29 years,"she said.

"We cannot nurture their potential if we continue to condone the disruption of education for adolescent girls.”

In 2021, of all the antenatal care attendances, 21 per cent were adolescent mothers aged between 10 to 19 years.

A total number of 23,279 pregnant girls aged 10 to 14 were recorded in the health facilities.

The PS said that Triple Threat fuels the epidemic’s effect and diminishes self-esteem and quality of life for young girls.

She said that while the ministry has embarked on a journey to ensure that every Kenyan has access to quality health services, securing the health of young girls is a priority.

“We will not win if one in every five girls continues to bear a child before their 19th birthday," Mochache said.

"This is the reason why we must approach this agenda with a preventive lens through a one government approach.”

Interior Cabinet Secretary Fred Matiang'i said that the government is going to work closely with the  stakeholders to ensure that they drive the statistics down.

“I am going to ask my colleagues who are here that the Triple Threat agenda is going to be our focus and our target," he said.

"We are going to throw everything at it to ensure that we work closely with our partners to drive the statistics down as it is.”

Matiang'i said that his administration will remain committed to addressing the issues and solely deal with the ‘madness’ that is threatening the destiny of the country.

Kamenju says five of the SGBV victims ended up being HIV positive.
News
4 months ago