Raila said that he will address water shortage by constructing dams.

• Azimio la Umoja presidential candidate said his administration will introduce a Livestock Insurance programme to help pastoralists in the country if elected.

• Raila said Turkana is the second largest county and it has a lot of mineral resources and a water aquifer that if used properly could address the challenges of Turkana people. 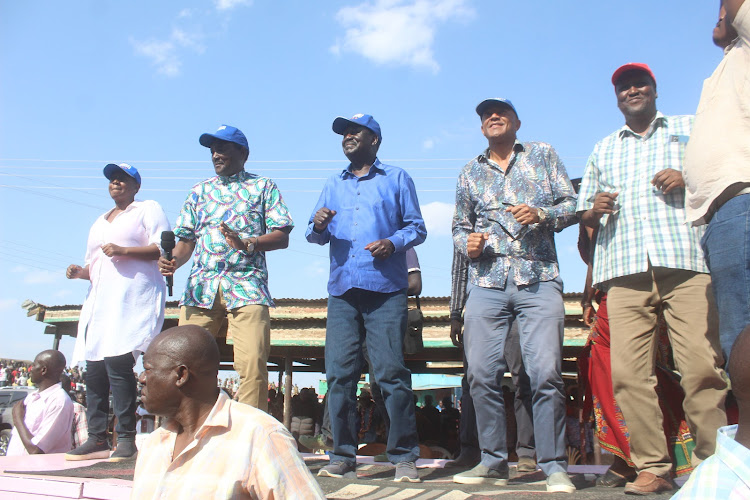 ODM Leader Raila Odinga(Centre) and Azimio team dance at the podium in Kakuma town during the Azimio campaigns in Turkana on Monday
Image: HESBORN ETYANG

ODM leader Raila Odinga has said Pastoralists in the North-Rift region will benefit from livestock insurance if he is elected as the president.

Raila spoke in Kakuma, Turkana West on Monday during his second day visit to hunt for votes.

“To help the pastoralists, I will start the livestock insurance to help them, so that when livestock are killed by floods or drought they can still be compensated,” Raila said.

He said Turkana is the second largest county and it has a lot of mineral resources and a water aquifer that if used properly could address the challenges of Turkana people.

The former PM said his administration will put plans to utilise the water aquifer for irrigation purposes to address food security in Turkana.

"The construction of dams will help to harvest water when it rains and it will help pastoralists to feed their livestock when drought season comes. When dams are filled with enough water our people will not cross to Uganda in search of water and pastures."

Raila said he will address the issue of perennial banditry that has been a big nuisance in the North region and at the border of neighbouring countries including Uganda, Ethiopia and South Sudan if elected president in August.

Kalonzo urged Turkana residents to vote for Raila so that they can revive the business sector in Lokichoggio town in Turkana West.

Kalonzo added that he will fly to South Sudan to meet President Salva Kiir and his Vice President Riek Machar for talks of peace along the border of Kenya ,and South Sudan.

Former Cabinet Secretary for Petroleum and Mining John Munyes, who is contesting for the gubernatorial seat urged Raila to address the water crisis, insecurity, food insecurity and unemployment if elected as the president.

Kositany confesses youths were paid to stone and heckle Raila.
News
1 month ago

Ruto angry because Uhuru and I support Raila — Kalonzo