As he made attempts to sell his candidature, the crowd chanted "Ruto! Ruto! Ruto!".

• He later addressed a section of residents from across Elgeyo Marakwet County in Iten town hall.

• Raila is making his moves into the region which is believed to be Deputy President William Ruto’s stronghold. 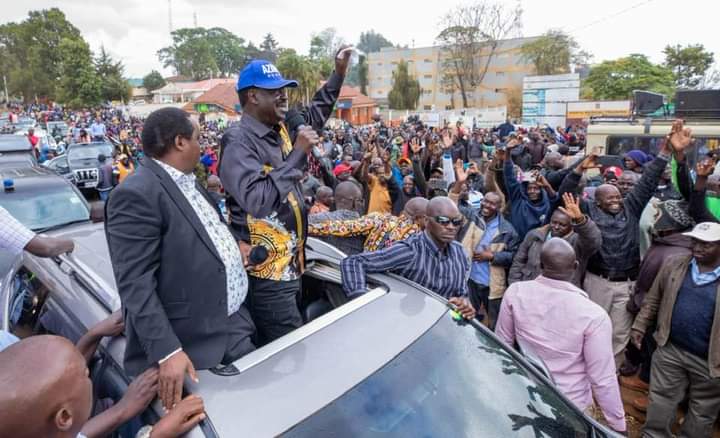 ODM leader Raila Odinga was on Friday in Iten, Elgeyo-Marakwet County to popularise his August 9 presidential bid in the Rift Valley region.

The region is believed to be Deputy President William Ruto’s stronghold.

While making his address in Iten town, Raila faced a hostile crowd that refused to be addressed by him.

The group was chanting the name of his main opponent, deputy president William Ruto.

As he made attempts to sell his candidature, the crowd chanted "Ruto! Ruto! Ruto!".

Before the heckling, Raila had addressed a section of residents from  Elgeyo Marakwet County in a town hall in Iten.

Raila was accompanied by a number of leaders including the area Governor Alex Tolgos.

The ODM leader, who started his three-day campaign in the North-Rift region on Friday, is wooing locals to back his presidential bid.

The incident came on the day when secretary generals of the constituent parties in the Azimio La Umoja Movement signed an agreement to change the name of the coalition.

In a press statement, secretary generals making up the Alliance met at a hotel and revealed that the coalition's name is Azimio La Umoja-One Kenya Alliance.

This comes after a push and pull that saw leaders allied to Raila maintain that the coalition name is Azimio La Umoja while those of Wiper leader Kalonzo Musyoka said the outfit's name is Azimio- One Kenya Alliance.

Ruto said that Raila holds no legacy and Kenyans should not be duped to support him.
News
10 months ago