"My mistake was to attend the burial of my long time friend Mr. Jackson Kibor."

• Raila was forced to call off his rally in Iten Town on Friday after the rowdy youths disrupted him.

• He was in the North-Rift region for the three-day campaigns. 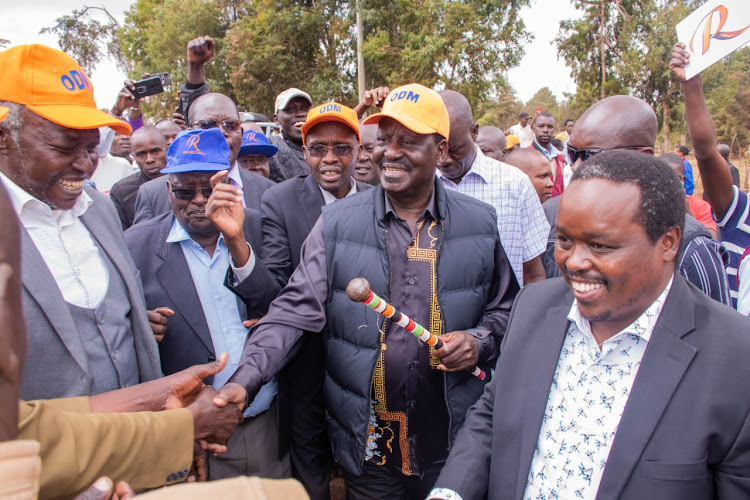 ODM leader Raila Odinga was on Friday pelted with stones after he arrived at the burial of Mzee Jackson Kibor.

The news of the incident was first shared by Suna East MP Junet Mohammed, who was with Odinga at the time of the attack.

Raila has also spoken of the incident and this is what he had to say:

A while ago today, I witnessed what should worry ever Kenyan keen to protect the freedom of speech, association and multipartysm that we fought hard and long to get.

The threat came in the form of youth; mobilized, armed and paid to cause mayhem and disorder, destroy property and even take away lives in a bid to create political zones in the country.

In the event that took place at Kabenes in Uasin Gishu, youth attacked my plane, destroying the air shield with rocks that were clearly aimed at me. On my way to the plane, they had pelted my vehicle with stones.

My mistake was to attend the burial of my long-time friend Mr. Jackson Kibor. I thank the security officers who did everything to ensure our safety.

The attacks present a very dark reminder of what this country has witnessed before, particularly in the run up to the 1992 elections and in the 2007-2008 polls.

In the run up to August, someone seems to be assembling a rag tag band of extremist youths, radicalized by lies and handouts to zone the country before pushing us into mayhem.

I call on the two, and all leaders from the region who believe in our constitution, to come out now, not later, condemn the incident and promise an end to the bizarre attempts to balkanize the country into ethnic and tribal party zones ahead of August election.

Despite the violence meted out on me and my team today, I remain optimistic that Kenya will hold peaceful, free and fair election in August.

As he made attempts to sell his candidature, the crowd chanted "Ruto! Ruto! Ruto!".
News
1 month ago