• The detectives attached to the Kenya National Examinations Council (KNEC) launched the investigations exactly one week ago.

• DCI says an elaborate web of fraudsters comprising school heads, security agents, parents and college students, in some parts of the country have conspired to give lazy students an unfair advantage. 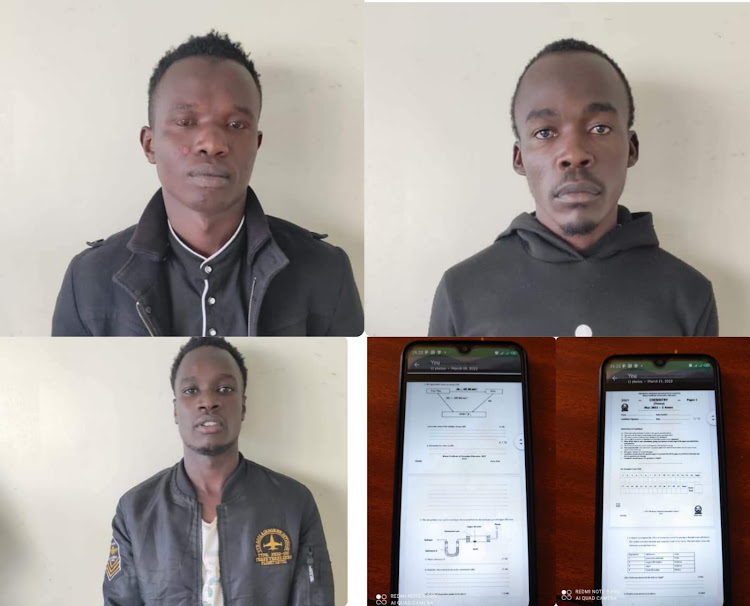 The detectives attached to the Kenya National Examinations Council (KNEC) launched the investigations exactly one week ago, and have so far arrested the four who are college students in at least four institutions of higher learning.

The main suspect Gideon Kibet Tanui alias Evans Kipruto, an Information Technology student at Baringo Technical College, was picked from his rented room next to the college on March 15, at around 10:30 am, while he was busy administering English paper 2 and Chemistry paper 1, to students of Silibwet and Sitoito secondary schools in Molo, Via his what's app group with a following of 70 members.

The suspect, DCI says, was dishing out examination papers at a paltry Sh500 per paper.

He was discovered to be a member of two fraudulent examination Telegram groups with over 17,000 followers.

"The IT student whose Mpesa account had over Sh10,000 at the time of his arrest was also operating a separate KCB account at Kabarnet branch, where he immediately transferred the received cash from his Mpesa to avoid reversals. To conceal his identity, the SIM card he was using was registered using the identification details of one Evans Kiprono," DCI boss George Kinoti said.

In an operation that also involved the DCI social media sleuths and a Twitter admin who posed as a candidate, Tanui is said to have engaged the detectives in a hide and seek game since last Sunday before he was cornered in Baringo.

His arrest led the detectives to Kevin Kiprotich Langat, a bachelor of arts student in Swahili, at Rongo University, who was arrested on Thursday.

DCI says Langat who was in constant communication with the first suspect had forwarded the English paper to him.

"It is at Rongo University where a wider syndicate of the examination fraudsters existed, in a Telegram group dubbed the ‘Kale Group’ created under the name ‘Bailing Out’ among other groups," DCI said.

SCI says Langat led detectives to yet another culprit, a first-year political science and Swahili comrade, identified as Justice Leting, who at the time of arrest was busy distributing the Kiswahili paper and preparing answers for the Chemistry practical paper.

According to the DCI, in Leting’s WhatsApp forum, a candid interaction between him and a student named Bett was retrieved, where Leting assured him that all was well and that the answers he had provided were legit since he was a ‘star’ in Swahili, during his time.

Using cyber and digital forensics, detectives intercepted tens of messages containing screenshots of the papers that are currently being examined, including handwritten answers which will be subjected to forensic document examination at the DCI National Forensic Laboratory, to ascertain the authors.

"Shockingly, Leting's mobile phone had the entire KCSE examination material which was recovered by the detectives. He revealed to have been working with other students at the institution who are still being pursued," DCI said.

DCI attributes the breakthrough into the high-level syndicate to Tanui’s earlier arrest at Baringo Technical college.

The arrest opened a fresh can of worms, into reports of the national examination malpractices.

In spite of the concerted efforts that the Ministry of Education led by the Cabinet Secretary and KNEC officials have employed to uphold the integrity of administering the examination, the efforts are being jeopardized by crooked government officials at county levels.

"An elaborate web of fraudsters comprising of school heads, security agents, parents and college students, in some parts of the country have conspired to give lazy students an unfair advantage over their counterparts who worked hard and prepared for their examinations," DCI noted.

In some instances, the examination containers are opened hours before the set time, to supply the examination papers to university and college students, for the development of answers that are later sold to candidates.

Relentless efforts by detectives have also unearthed that the syndicate also operates a till number account at Ecobank, where candidates are being asked to deposit Sh5,000 per paper, or a discounted rate of Sh20,000 for the whole examination.

Detectives have already zeroed in on the masterminds of this high-level fraud, believed to be hiding in Nandi hills. They will not escape.

Cyber and digital forensics experts are analyzing all the subscribers in the Whatsapp and Telegrams groups involved in the Examination malpractice for legal action, as documents examination and handwritings sleuths complement their efforts.

They were arrested at two examination centres in Turkana.
News
10 months ago