UDA said its lawyers will defend any aspirant who is harassed.

• UDA condemned the alleged acts of intimidation directed at their aspirants.

• UDA lawyers will defend any aspirant who is harassed. 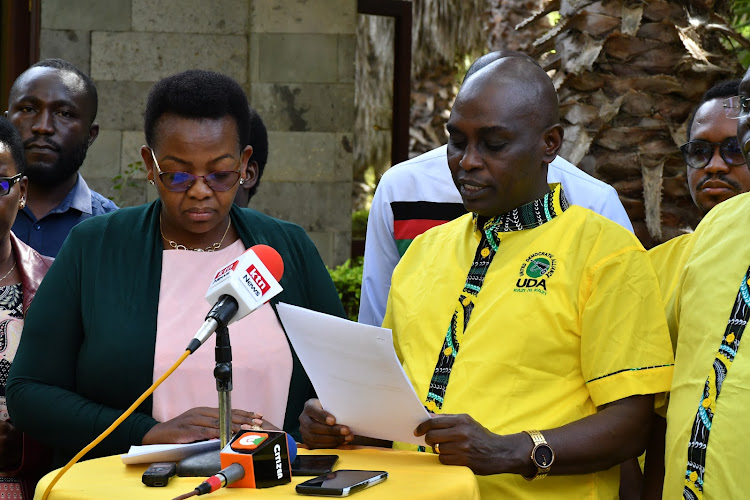 UDA party has raised concerns over alleged harassment of its aspirants by the state officials who they say are affiliated with the ruling Jubilee Party.

In a statement on Thursday, the party's national election board Chairperson Anthony Mwaura claimed the state is coercing their aspirants in some parts of Mt Kenya region, Kisii and Nyamira counties to quit UDA.

They faulted some government officials accusing them of being behind the harassment of some leaders in Kirinyaga county.

He added that the intimidation has taken the form of arrests, accusations of tax evasion, trumped-up criminal charges, and the use of fake opinion polls.

Mwaura stated that on Wednesday, Kirinyaga county majority leader Kamau Murango was arrested from his Embu home, driven to Nairobi DCI headquarters and questioned up to 2 am the next day.

He said Murango was accused of forging documents in 2020, despite him stating he had the original documents.

"Police were later to tell him to switch his political side to Jubilee Party so that his tribulations could end, a request he declined, and consequently he was asked to be reporting to DCI headquarters once a week."

The party claimed that several UDA MCA aspirants from Kirinyaga have been called and coerced to join the Jubilee Party.

"In Kiambu and Murang’a counties aspirants are being lured with money to decamp from UDA. Failure to which they are threatened with arrests and taken to court on fictitious charges."

"In Nyamira and Kisii, aspirants live in fear because a government official through the provincial administration has ensured that they are constantly harassed."

The party added that there have also seen what appears to be coordinated attacks against UDA women aspirants across the country.

UDA condemned the alleged acts of intimidation saying they have no space in a democratic country like Kenya.

"The choice to belong to a political party one wishes to be in is protected by the constitution and arrests and intimidation should not be used to persuade aspirants to join a political formation they do not want."

UDA lawyers will defend any aspirant who is harassed.

Big day for Ruto as UDA crowns him presidential flagbearer

Narc Kenya leader Karua and TSP boss Kiunjuri among the guests invited to the event
News
2 months ago
WATCH: The latest videos from the Star
by KEVIN CHERUIYOT Online Journalist
News
17 March 2022 - 16:04