Our proposal is Mudavadi should deputise Ruto – Malala

Malala insisted that Ruto's deputy must be well versed with the economy.

• Malala ruled out the perception that the alliance will lose its popularity in the Mt Kenya region if Musalia deputises Ruto.

• Malala said Mudavadi is the right person to ensure that the Uchumi Kwanza manifesto comes true since he is well versed with the economy. 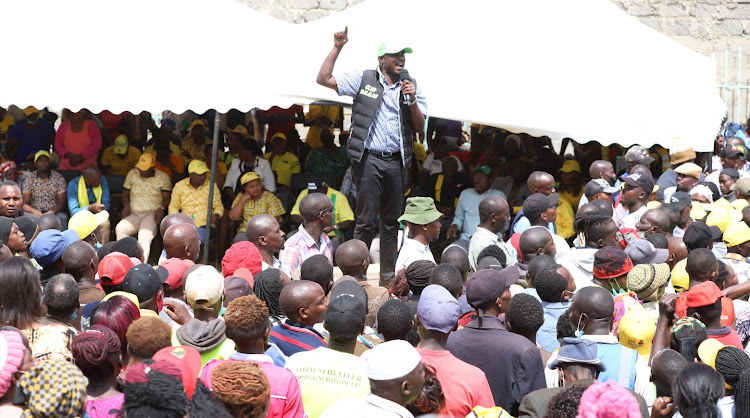 Kakamega Senator Cleophas Malala has said the ANC party is firmly in the Kenya Kwanza Alliance and will accept the outcome of the ongoing negotiations that seek to identify the person who will be deputy president William Ruto's running mate.

The latest development from Malala appears to be a clear indication that ANC leader Musalia Mudavadi has given up the earlier push to be picked as the alliance flag bearer.

This loosely translates to: "As ANC party, we have forwarded our proposal that the person to be picked as William Ruto’s deputy is Musalia Mudavad".

Malala said that Mudavadi is the right person to ensure that the Uchumi Kwanza manifesto of the alliance comes true since he is well versed with the economy.

He also ruled out the perception that the alliance will lose its popularity in the Mt Kenya region if Musalia will deputise Ruto.

“We are not in this thing to look for positions, we are here to change the lives of our people, our stand, therefore, is not about positions.”

The senator also said that ANC is still popular in the western region even after the Democratic Action Party of Kenya (DAP-K) of Eugene Wamalwa raided the region.

Earlier on, Malala met with leaders from the Mt Kenya region during which, he said, they agreed to work together and focus their energy on winning the presidency.

“The Mountain and Mulembe Nation will work together to deliver the 5th president of the Republic of Kenya. Privileged to have met leaders from the expansive Mt.kenya region for a candid tête a tête on the same.,” Malala said.

Malala says ANC will not repeat mistakes they made when they joined the disintegrated Nasa.
Counties
2 months ago

The senator said they will work together with Mt Kenya leaders ahead of August polls.
News
2 months ago
WATCH: The latest videos from the Star
by KEVIN CHERUIYOT Online Journalist
News
14 March 2022 - 21:01