• The former Vice President exuded confidence that Raila will endorse him.

• Kalonzo was accompanied by KANU chairperson Gideon Moi, who used the opportunity to popularise the Azimio La Umoja Movement. 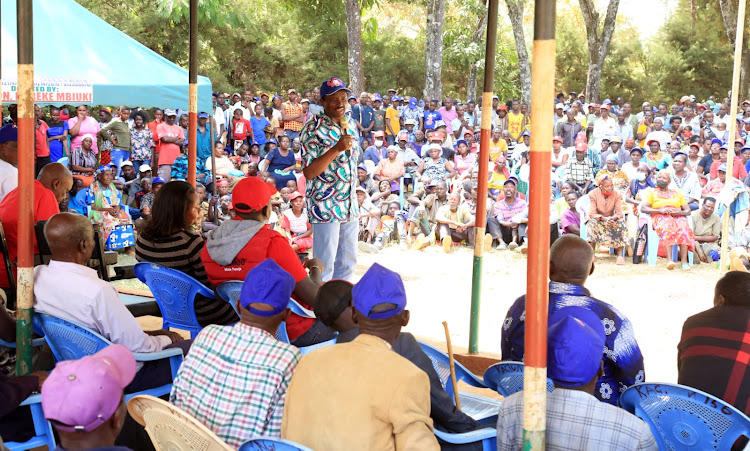 Wiper leader kalonzo Musyoka is a great critic of Deputy President William Ruto and has publicly ruled out the possibility of him working with the DP.

On Saturday, Kalonzo endorsed ODM leader Raila Odinga for the presidency for the third time.

While in his visit to Tharaka Nithi on Monday, Kalonzo revealed that he has picked something from Ruto that would be useful to him come the 2027 general elections, where he will be contesting for the presidency.

It loosely translates to: "Truth be told, this man DP Ruto knew that he will be vying for the presidential seat. And once he was sworn in as the DP, he immediately started campaigning for the presidency. I’ve learned my lesson from him. Immediately Raila is sworn president, I will begin my campaigns for the top seat".

Kalonzo was accompanied by KANU chairperson Gideon Moi, who used the opportunity to popularise the Azimio La Umoja Movement.

The former Vice President expressed his optimism that Raila will endorse him after his term come August 9 elections.

He also insisted that the name of the coalition will be Azimio-OKA, hence representing the interests of both parties.

Earlier in the day, the Raila team dismissed the proposal to name the coalition Azimio-OKA.

They said only parties joined the Azimio coalition.