We are sorry - Boda boda riders say amid crackdown

Hundreds of bodaboda riders have been arrested across the city since the crackdown started.

• 16 riders were arraigned on Wednesday and charged with the sexual assault of a female motorist in the city.

• President Uhuru Kenyatta also directed the registration of all motorcycles. 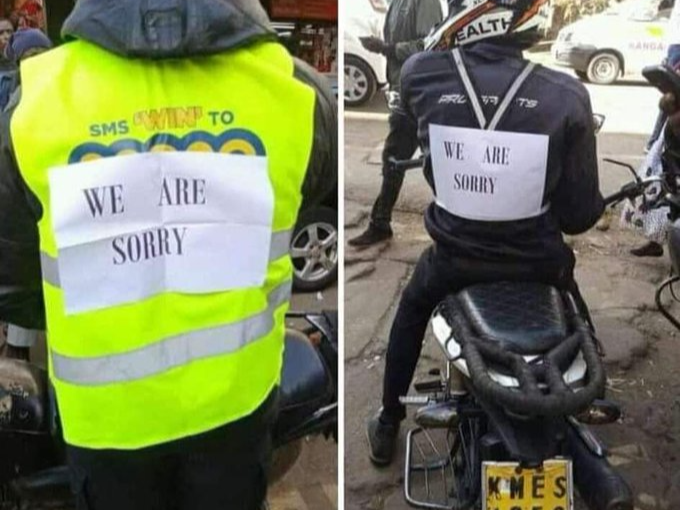 Bodaboda riders display 'we are sorry' messages messages on their backs amid ongoing crackdown on the operators in the Central Business District that followed the sexual assault of a female motorist on March 4.
Image: CHARA GEORGE/TWITTER

Just a day after police intensified crackdown on bodaboda riders following the sexual assault of a female motorist in the city, the operators appear to have been hit by remorse.

A photo shared on Twitter by Chara George (@GeorgecharaG) showed a section of the operators with messages stuck on their backs with the words "we are sorry".

The photo was accompanied by a captioned message from George appealing to authorities to have mercy on the operators following the apology.

"Please the powerfully connected middle and upper class, forgive them. They are brothers, sons, fathers and husbands. They serve the less fortunate and honest constituency who can't afford a car but has families to feed on daily wages," George said.

On Wednesday, a Milimani Court detained 16 riders until Thursday pending determination of a petition by the prosecution to detain them for 20 days to conclude investigations.

The 16 ar expected to be charged with the sexual assault of a female motorist on Wangari Maathai Road on March 4.

Police want more time to review CCTV footage at the section of the road to help with the compilation of evidence against the accused persons.

Milimani Principal Magistrate Robert Shikwe said he needed more time to make his ruling on the prayers sought by the prosecution to detain the suspects for 20 days.

On Tuesday, over 100 motorcycle operators were arraigned at the Milimani law court and charged with riding causing obstruction.

They all pleaded guilty to the offence before senior principal magistrate Esther Kimilu and pleaded for leniency in sentencing.

The Directorate of Criminal Investigations said on Tuesday that he had managed to forensically identify the mastermind in the assault incident and traced him to his hideout in Nairobi's Mukuru Kaiyaba slums.

"However, the suspect who is aware of the ongoing crackdown on errant boda boda riders escaped our dragnet by a whisker, via a sewer duct in the densely populated settlement," said DCI George Kinoti.

He gave the name of the suspect as Zacharia Nyaora Obadia, and advised him to surrender at DCI headquarters or the nearest police station within 24 hours.

Kinoti said the suspect was positively identified by his wife and other relatives in his rural home in a videotape that captured the sexual assault of the female motorist.

Over 200 riders arrested after assault of female motorist in city

The petition wants it made mandatory for bodaboda riders to have a tag indicating their full name and license number for ease of tracing.
News
8 months ago