5,000 UDA delegates to endorse Ruto at NDC on Tuesday 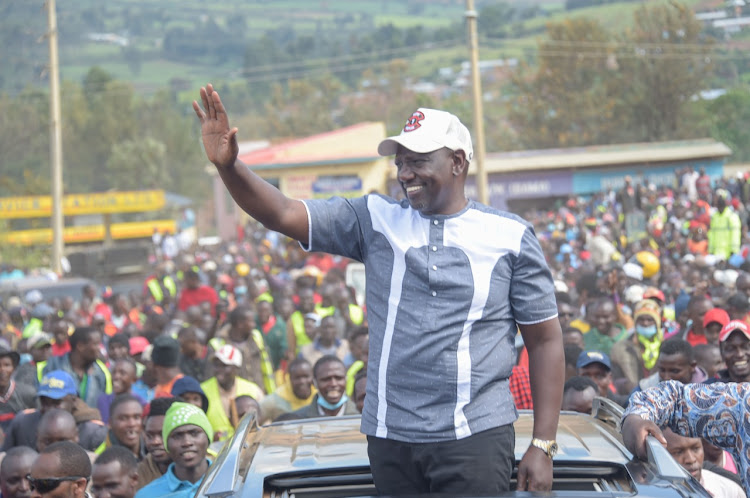 About 5,000 delegates allied to United Democratic Alliance are expected to attend a political jamboree at Kasarani Stadium on Tuesday to endorse Deputy President William Ruto bid.

This will be in accordance with Article 6 of the UDA constitution which clarifies the minimum number of delegates expected at such an event.

Ruto's endorsement will mark his decamping from the Jubilee party.

The DP and ODM leader Raila Odinga are seen as the clear front runners in the succession race.

On Sunday, DP Ruto is expected to hold a mega rally at Thika stadium to seek blessings and seal a covenant with the people of the Mt Kenya.

Nyandarua Woman Representative Faith Gitau on Wednesday told the Star that the National Delegates Conference will be the mother of all events.

She said the event will attract more than 10,000 delegates and already 5,000 have confirmed attendance.

“The UDA NDC has attracted many delegates, we already have a huge number that has registered and everyone is invited," she said.

She expressed confidence that Ruto is the suitable candidate to succeed President Uhuru Kenyatta.

UDA secretary for legal affairs Edward Muriu confirmed that  6,000 aspirants have paid for their nomination fee.

Muriu said all the plans for the Tuesday meeting have been completed.

“Ruto will jet in on Thursday then hold a special meeting with Mt Kenya leaders ahead of Sunday rally at Thika stadium,” Muriu said.

He said after being endorsed by the delegates, the DP will have full authority to drum up support for his presidential bid and the party.

“UDA party is a friend to everyone and don’t expect other guests other than hustlers who form its foundation alongside Kenya Kwanza Alliance principals," he said.

Kiambu senate aspirant Karungo wa Thang’wa said the delegates conference will also allow the DP to sign an official coalition agreement with both Wetang'ula and Mudavadi.

Karungo said the DP could not have signed a working formula with ANC and Ford Kenya without delegates approval.

“The delegates will approve the coalition agreement with our friends and this will allow our party leader to reach out to others by signing a post or pre-election agreement," he said.

EALA MP Simon Mbugua in previous interview said they are determined to form the next government despite the opposition from Azimio La Umoja movement.

Mbugua said the party will conduct peaceful and transparent nomination exercise to keep its supporters from defecting to rival parties.

“We will accommodate everyone in the next government, if one fail to clinch the nomination certificate, he will join the winner and campaign as a unit," he said.

Chama Cha Kazi led by Gatundu South MP Moses Kuria is also expected to endorse Ruto's presidential bid during their NDC that will be held on same day.

It’s not clear whether Ruto and his Kenya Kwanza will attend the CCK NDC.

Kuria recently said he will rally more than 21 political parties to support the Kenya Kwanza.

Ruto set to address four meetings in UK on Tuesday

Ruto heads to Thika on Sunday for mega rally

UDA or ANC which way for Sakaja?

Senator stated that he is firmly in the race to become Nairobi’s fourth Governor.
Counties
5 months ago

Say there will be no nominations in areas where there will be a single candidate contesting under the party.
Counties
5 months ago

MP Gachagua says residents will respect Kenyatta if he stops fronting his successor in the August 9, polls
Counties
5 months ago
“WATCH: The latest videos from the Star”
by AMOS NJAU
News
09 March 2022 - 23:00