Ruto set to address four meetings in UK on Tuesday

• Ruto will meet with the Minister for the Armed Forces from 11:15-11:45 GMT in London, hosted by James Heape

• In the Afternoon, Ruto will meet with the Minister for Africa before meeting with Anthony ST John 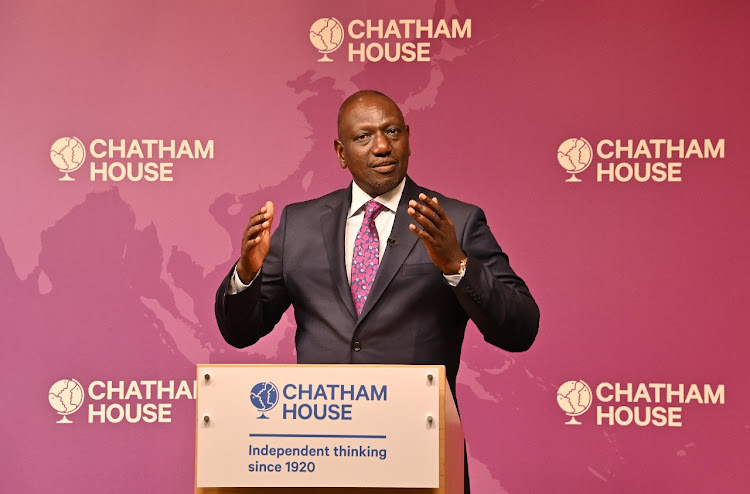 Ruto's Presidential Campaign Director of Communications Hussein Mohamed said the DP will deliver his first speech at the Marlborough, where he will be hosted by the Commonwealth Secretary from 9-10:30 GMT, in London time.

He will then meet with the Minister for the Armed Forces from 11:15-11:45 GMT in London, hosted by James Heapey.

In the Afternoon, Ruto will meet with the Minister for Africa before meeting with Anthony ST John in the evening with the selected members of the House of Lords.

On Monday, the DP denied sharing cabinet positions with President Uhuru Kenyatta in their two terms in office.

The DP  while speaking to Chatham House on Monday said the Jubilee administration was a unit headed by the President who called the shots.

“There were no dockets that were given to me. I didn’t appoint any minister anywhere. Everybody was appointed by the President of Kenya,” the Ruto.

Ruto's assertions are a sharp contrast to what President Uhuru said last month at Sagana III where he appeared to suggest that they shared the government down the middle.

But speaking in the UK on Monday, the DP denied ever sharing the government positions.

The DP spoke at Chatham House in the UK on Monday.
News
2 months ago

Ruto is still in the UK for his tour.
News
2 months ago
“WATCH: The latest videos from the Star”
by KEVIN CHERUIYOT Online Journalist
News
08 March 2022 - 15:17