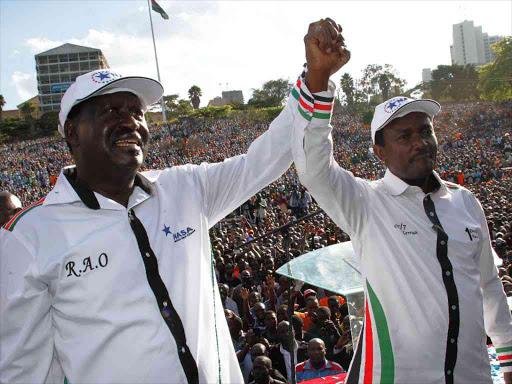 ODM chief Raila Odinga and Wiper boss Kalonzo Musyoka are inching closer to striking a political truce ahead of the unveiling of the Azimio la Umoja presidential flag bearer on Saturday.

The Star has established that the duo has agreed to close ranks after days of behind-the-scenes negotiations by their trusted allies to reunite them.

With the truce, Kalonzo is expected to attend the mega Azimio political event in Nairobi on Saturday where Raila will be unveiled as the outfit’s presidential candidate.

“The talks are going on so well so far. We are in Azimio. There is no debate about that. Take that to the bank and get a loan,” Kanu secretary general Nick Salat said.

The outspoken long-serving SG said: “It is working well. Definitely, he (Kalonzo) will attend the rally.”

The two attended the launch of the re-election of Samburu West MP Naisula Lesuuda.

“I have today bumped into my good friend and patriot, Hon Raila Odinga on my way to Samburu for Naisula Lesuuda’s re-election campaign launch,” Gideon tweeted.

A Wiper MP, who is part of the negotiating team, disclosed that the ‘progress’ has been good and that the two leaders would work together again in the upcoming polls.

“Yes, progress is good and we hope everything will be in place by Friday,” said the MP, who sought anonymity due to the sensitivity of the matter.

The two former Nasa chiefs are expected to meet between Thursday and Friday after their allies cleared the way for their reunion.

“The real meeting will be between the principals,” Makueni Senator Mutula Kilonzo Jr said.

Makueni MP Dan Maanzo, an ally of Kalonzo, said that the two leaders need to come together as a matter of urgency to block Deputy President William Ruto from winning the presidency.

“Those leaders must work together or they will give Ruto a smooth ride. They need each other,” Maanzo said.

Ahead of Raila’s unveiling on Saturday, One Kenya Alliance, in which Kalonzo and Gideon are co-principals, will on Friday sign a coalition agreement.

Narc Kenya leader Martha Karua and UDP boss Cyrus Jirongo are the other co-principals in the outfit.

Oka will then form a mega alliance, Azimio-Oka, with Raila as the joint presidential candidate.

The unfolding events are likely to reduce the August 9 presidential election to a two-horse race pitting Raila and Ruto.

Ruto, who is the UDA leader, has teamed up with ANC chief Musalia Mudavadi and Ford Kenya boss Moses Wetang'ula to form Kenya Kwanza Alliance.

Kalonzo has been reluctant to join Azimio and back Raila for president. He has said the ODM leader ought to back him for the country’s top seat in accordance with a deal they signed in 2017.

Last week on Tuesday, the former vice president released to the public the secret document he said he had signed with Raila in April 2017.

In the document, the two agreed that Raila would support Kalonzo for president in the 2022 general election whether or not the former Nasa coalition formed the government.

“Raila agrees in a public MoU to serve one term and publicly endorse Kalonzo as the presidential candidate for 2022,” the two-page document reads.

After three years at the presidency, Raila is to delegate substantial national duties to Kalonzo and largely concentrate on international duties.

The ODM boss is currently leading back-to-back campaigns across seven select counties as a build up to the Nairobi crowning jamboree.

On Tuesday Raila campaigned in Maralal and Wamba towns.

The Azimio camp will be in Wajir on Wednesday before heading to Meru and Kisumu on Thursday and Friday respectively.

The rallies will culminate in the jumbo political gathering in Nairobi on Saturday for Raila’s unveiling.

The former Prime Minister will then fly to the UK for five days for a series of engagements.

Raila will, among others, deliver a talk at Chatham House and meet the Archbishop of Canterbury.

He comes with almost 2 million votes that can give Raila a win before even the polls close.
Opinion
9 months ago

Raila to Kalonzo: We'll not force anybody to join Azimio

ODM leader signals he will forge  ahead without the Wiper leader.
News
9 months ago

What leaders said on election matters