The government says 22,891 primary schools have so far been supplied with laptops

•Ministry of ICT says digital content has been installed in devices for Grade 1 to Grade 4.

•Kenyans can confirm availability of gadget in schools by visiting digischool.co.ke. 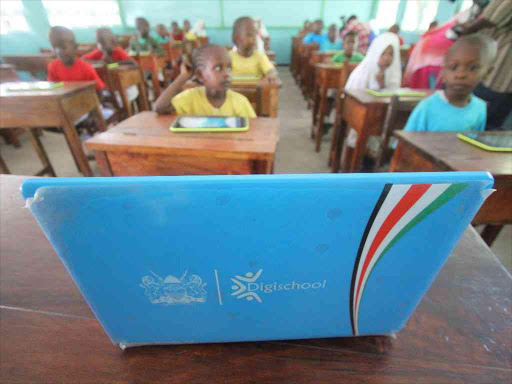 The government has downplayed concerns that the digital learning programme that was to equip lower grade learners with laptops has failed, affirming that Kenya is in fact a continental leader in the implementation of the programme.

In a zoom meeting with media on Monday dubbed Sema na Spox, the government led by spokesman Cyrus Oguna, defended the progarremme saying those criticizing it are speaking from a point of ignorance.

The officials gave a breakdown of the implementation status of the programme with acting ICT Authority CEO, Kiprono Rono saying 22,891 primary schools have so far been supplied with the gadgets.

“When it comes to content, we have managed to install content in devices for Grade 1 to Grade 4 and the other content is found on the Kenya Education Cloud,” Rono said.

“In Africa we are leading followed by South Africa, so from the region we are seen as leaders, other countries are coming to learn from us,” Rono added.

He said that members of public can confirm the presence of the gadgets in schools near them by visiting digischool.co.ke.

”Type name of school without ‘primary’ and it will show number of devices of schools deployed and their serial numbers. If your school is Baringo Primary school, type Baringo School and it will show you,” Rono said.

He further revealed that, other than the bright blue colour of the devices which makes it easier for members of the public to pick them out when seen out of school, the gadgets are being installed with special devices to enable tracking in case they are stolen from schools.

The Digital Literacy Programme, popularly known as the schools laptops project, was among President Uhuru Kenyatta's pet projects when he came to power in 2013 with then The National Alliance party.

The Sh24.6 billion laptop project was touted as the answer to the missing piece of digital skills in Kenyan schools.

It wasn’t until 2016 that the project was fully conceptualized with the government boasting at the time that it had supplied 95 per cent of learners in Class 1 with laptops.

The narrative quickly changed soon after and the talk was that learners would be given tablets. This later changed to digital labs.

The government has since then come under heavy criticism over its failure to issue learners with laptops, with the matter hijacked by opposition politicians as a campaign weapon against the Jubilee administration in the run up to the 2017 polls and beyond.

In a presentation before Parliament's Education committee in March 2019, headteachers outlined reason behind the failure of the laptop project.  Lack of funding, lack of electricity, lack of teacher training and lack of storage for the gadgets emerged as the main reasons.

Kenya Primary Schools Head Association chairman Nicholas Gathemia told the MPs that only two teachers were trained per school, and the training was done just once. Teachers dismissed this as too little time to effectively acquire sufficient knowledge necessary for digital learning.

They also said the laptops were supplied only once and were being shared by three classes instead of the intended one gadget per child.

“This meant that those who received the bright blue gadgets in Class 1 proceeded with them to Class 2, leaving newly admitted pupils with no devices,” Gathemia told the Education committee.

He further said that the medium-term budget expenditure document by the Education ministry showed that Treasury slashed Sh5 billion meant for the project.

But during the zoom meeting on Monday, the government put forth a spirited explanation that sought to discount the narrative that the laptops project is a total failure.

TSC Director of Quality Assurance, Reuben Ndamburi, said so far 229,000 teachers have been trained across the country on ICT integration in CBC teaching and learning.

“Of this number, 163,000 teachers have been trained on remote learning methodology to ensure they can teach even during a pandemic like the one we have right now,” Ndamburi said.

He said TSC has since made teacher services online and that means all teachers now have the basic ICT skills.

“We integrated ICT in the teaching and learning process as one of the core areas of CBC learning so all teachers can teach any subject using ICT,” he explained.

He said ICT has also been integrated in Teachers Performance Appraisal system (TPAD) that requires teachers to able to teach at least one subject using ICT skills.

Oguna said all the criticism about there not being sufficient teachers for digital learning was misinformed.

“And as you can see the concern that there are not sufficient teachers for digital learning is not well founded…what we are asking the people is that listen to the government, not this misinformation going around,” Oguna said.

Simon Kamau from System Protection Unit (KPLC) said a total of 22,927 schools have been connected with power. He said 19,042 of the schools are connected to the main grid while the remaining 3,885 schools in remote areas are connected to solar supply.

“We have been trying to ensure that all these schools that are connected continue to have uninterrupted supply to support the digital learning. The neighbouring communities have also benefitted from the connection,” he said.

He said the content is continuously updated by teachers on the Kenya Education cloud (Elimika portal), by ICT intern officers at the subcounty level or through offline means when teachers take the gadgets physically to the institute for upgrading.

Ndamburi confirmed that some 1.2 million new gadgets are expected to be produced by the end of the year though local assembly line by Moi University and Jomo Kenyatta University of technology where 12,000 devices are produced daily.

He said the production is phase two production targeting Grade 4-6 learners and for sale to the public.

Oguna said the next update on the digital learning programme will be issued in three month’s time.