EYES ON THE POLL

Says all that Ruto promised he has forgotten, now he is coming with a wheelbarrow 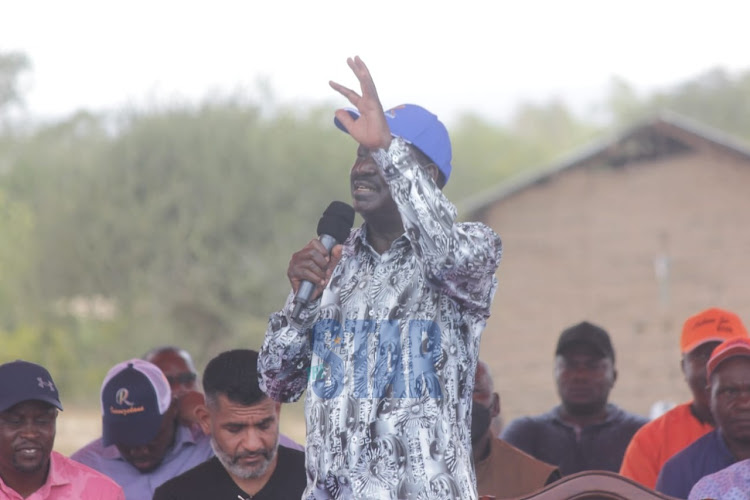 The former prime minister described the DP as a ‘Mr Promise’ who uses ‘empty’ promises to entice the electorate, only to renege on the pledges after ascending to power.

“All that he promised he has forgotten now he is coming with a wheelbarrow,” Raila said.

The ODM leader spoke on Sunday at a rally held at the Tononoka grounds in Mombasa.

Raila was accompanied by an army of politicians including seven governors led by Mombasa's Hassan Joho.

This was an apparent show of political might in his second day of charm offensive in the region.

Raila, who was also in Kilifi on Saturday, moved to ring-fence the region that has voted overwhelmingly for him since 2017.

He said the DP cannot be trusted to deliver on the pledges he is currently making in rallies across the country.

While questioning Ruto's integrity and credentials to lead the country, he said the DP was at the forefront promising laptops to school children, one million jobs to the youths every year and a double digit economy.

The pledges are yet to be fulfilled with Jubilee's tenure ending in six months.

“In 2013, he promised that every county will have a state of the art stadium.

“All that he promised, he has forgotten. He (Ruto) now says he will generate four million jobs and not one,” he said.

The DP has pledged to pump Sh100 billion to programmes that would generate at least four million jobs for the youth through his bottom up economic model.

Once again, Raila questioned the source of Ruto’s funds which he donates in harambees, claiming the money are proceeds of graft.

“Even Safaricom cannot do such harambees,” the AU special envoy said, as he took on the DP for painting him a state project.

Ruto has often dismissed the ‘corrupt tag’ saying he is ‘a generous hustler’ who gets money from his businesses to empower other ‘hustlers.’

“I employed Ruto as Agriculture minister….. I picked Musalia Mudavadi as my deputy together with Uhuru Kenyatta. How can I be his project?” he said.

Ruto and Musalia – principals in the Kenya Kwanza Alliance – have often claimed the ODM leader is a state project, who Uhuru will reduce to a puppet if he wins the presidency.

Raila rallied the region to firmly remain behind him, saying he harbours the real change and liberation which the country has yearned for.

In 2017, the ODM boss got 69 per cent of the votes from Mombasa alone against Jubilee 29 per cent.

He promised massive economic transformation, adding that the coastal city, which hosts the Mombasa port, the biggest in East Africa, will kick-start his economic agenda for the country.

“The economic revolution will start here in Mombasa. Mombasa port will be a free port like Dubai.  We will build a special economic zone.

“We will expand our economy. Our economic growth rate will be 10 per cent per annum. In 15 years, Kenya will jump from a poor to a rich nation,” he said.

Raila said his administration will introduce a social protection fund for all poor families, ensure absolute free education for all children and set up a fund for small business.

“We will start smart agriculture to ensure our farmers get their rightful share. We will expand ICT and take care of single mothers,” he said.

The lot urged the region to shun Ruto, saying the former prime minister understands the assignment and would be trusted to take President Uhuru’s agenda forward.

Raila arrived in Bomas after a 10-day trip to India.
News
5 months ago

Raila is a fighter of the people and fighter of corruption - Kibwana
News
5 months ago
“WATCH: The latest videos from the Star”
by JULIUS OTIENO AND BRIAN OTIENO
News
20 February 2022 - 23:00