• Shahbal was on Sunday endorsed by the Somali community living in the region and a group of veteran politicians.

• The governor aspirant promised to focus on the transformation of Mombasa county through the inclusion of all the communities. 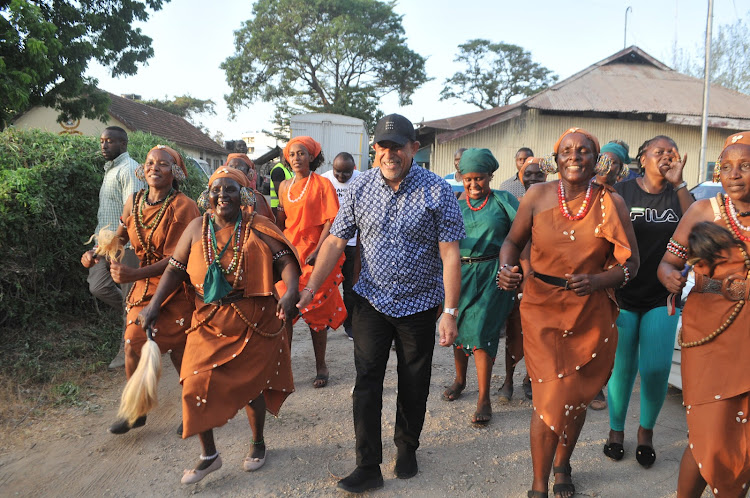 Mombasa businessman Suleiman Shahbal's gubernatorial bid got a major boost at the weekend after some community groups endorsed him.

On Saturday evening, Shahbal met with the Gema community living in Mombasa, who said they will vote for a leader who supports their businesses.

On Sunday, he was  endorsed by Somalis living in the region and a group of veteran politicians at the Coast.

Native Veterans is a group of former councillors who served in the now-defunct Mombasa Municipal Council and senior citizens who are involved in active politics.

Abdirahman Yussuf, the chairperson of the Somali community in Mombasa, said Shahbal has shown interest in supporting business people in the region.

“As a community, the Somalis are mainly engaged in business. Shahbal is a businessman and he has already pledged to assist us. We have, therefore, decided to endorse his candidature,” Yussuf said.

He added that they also want a nominated MCA post in the assembly, business permits issue addressed and jobs for their youth.

Alfred Otieno, the chairperson of the Native Veterans, said he has been involved in active politics since 1992.

In 2007, he campaigned for Mombasa Governor Hassan Joho, who was then vying for Kisauni parliamentary seat.

“Our group is made up of former councillors and all those who were involved in politics in the 90s and the early 2000s. We have a membership of about 600 people,” Otieno said.

He said they are actively involved in deciding the political direction of Mombasa.

“Shahbal is a leader who is committed to transforming Mombasa. As the older generation, we have seen his capabilities and we have since decided to campaign for him at the grassroots. He is our candidate,” Otieno said.

Crispus Waithaka, the chairperson of the Gema community in Mombasa, said they will organise another forum to fully endorse Shahbal.

“Saturday’s event was our meeting. We invited Shahbal as a chief guest and we were able to listen to him. We will organise another meeting where we can now fully endorse him,” Waithaka said.

In the three meetings, Shahbal promised to focus on the transformation of Mombasa county through the inclusion of all the communities.

He hailed the Gema and Somali communities for impacting Mombasa's economy, through the many businesses they operate within the region.

“Our agenda is crystal clear and well defined to the people of Mombasa. We will give priority to creating job opportunities and uplifting small businesses,” Shahbal said.

He said that the business environment in Mombasa currently was not very conducive for traders because of increased county licensing fees.

Shahbal promised to reduce licensing, adding that he will stop harassment of small traders and hawkers by county askaris.

The cost of a single business permit in Mombasa ranges from Sh8,000 onwards depending on the type and size of business.

“The situation that most businesses find themselves in is not convincing. We have to bring changes to spur our economy,” he said.

He also promised to offer financing to SMEs, especially those operated by women and single mothers to empower them economically.

“I am a businessman myself, I understand what you go through. I give you my assurance that things will turn around under my leadership. My appeal to you is that you elect a leader with a proven track record,” he said.

Shahbal promised to give each ward representative a Sh50 million kitty annually to stimulate development from the ward level.

Governor aspirant says region offers more to the national government but gets less in return and this should change.
Counties
1 year ago

Aspirants eyeing the Mombasa governor seat up their campaigns.
News
9 months ago

Raila returns to Mombasa as Nassir and Shahbal fight over ticket

The two are battling for ODM ticket to run for governor; Mvita MP had assumed he'd get ticket
Counties
1 year ago
“WATCH: The latest videos from the Star”
by ONYANGO OCHIENG
News
07 March 2022 - 22:00