The ODM boss has lined up a nine-day marathon rallies 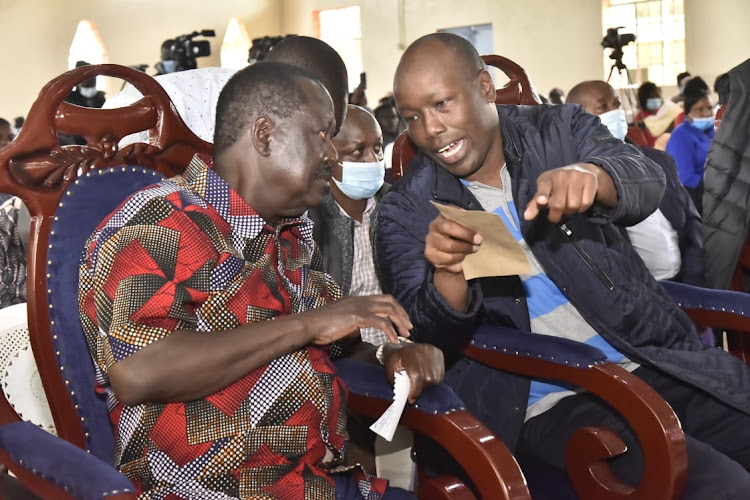 Former Prime Minister Raila Odinga on Wednesday began his two-week countrywide campaign in Nakuru as he builds momentum for the unveiling of the coalition presidential candidate.

The ODM boss has lined up a nine-day marathon rallies across seven counties culminating into a grand Azimio launch in Nairobi on March 12.

President Uhuru Kenyatta is expected to lead other Azimio parties during the Nairobi jamboree to unveil the candidate who will fly the coalition’s flag in the August 9, polls.

The ODM leader kicked off his whirlwind campaigns without Uhuru whom he said is now part and parcel of the Azimio team.

Uhuru has of late taken charge of his succession matrix and has publicly announced Raila as his preferred successor.

Addressing supporters during stopovers on his first day of campaigns, Raila said he has joined forces with President Kenyatta to realise the dreams of the country's founding fathers, a united country.

“We were in Nairobi recently, Jubilee and ODM parties came together under Azimio,” Raila said.

He addressed rallies in Molo, Turi – Elburgon, Njoro Posta and winding up at Kisulisuli in Nakuru.

The Wednesday meeting was the first major political engagement since the former Prime Minister was endorsed by his ODM party to run for president.

In the next nine days, Raila will lead the Azimio brigades to Rift Valley, Nyanza, Western, Eastern, Central, Northeastern and Nairobi to popularise the outfit and explain his agenda to Kenyans.

During the Nakuru campaign, Raila continued with his charm offensive to bring on board the region to support his fifth presidential bid.

The ODM boss said he is ready to work with all parties in his bid to succeed Uhuru.

The AU High Representative for Infrastructure and Development said he is committed to unite the country devoid of ethnic groupings for the sake of peace and social-economic growth.

He described the August contest an economic liberation that will ensure Kenyans live decent lives.

If elected, Raila pledged, to implement free education from primary to secondary and affordable medical care under the Baba Care programme.

“Farmers are facing serious problems, we will revive pyrethrum and timber farming in this region.  We will also subsidise fertiliser prices from the current Sh6,000 to Sh2,000,” he said.

Raila also reiterated that he will implement his ambitious Sh6,000 social protection meant to cushion poor households if elected.

He dismissed critics of the multi-billion shilling programme insisting that he will seal loopholes in government to finance the safety net.

Nakuru Governor Lee Kinyanjui asked the ODM boss to consider the area with at least one cabinet slot when he forms the next government.

“Since independence the last minister Nakuru had was in 1964.We will support you, let Nakuru have the first minister," Kinyanjui said.

"Let the Agriculture minister come from Nakuru, this marginalisation must end."

Raila said his agenda is to see a united, peaceful and prosperous Kenya.
News
4 months ago
“WATCH: The latest videos from the Star”
by LUKE AWICH AND PURITY MWANGI
News
02 March 2022 - 23:00