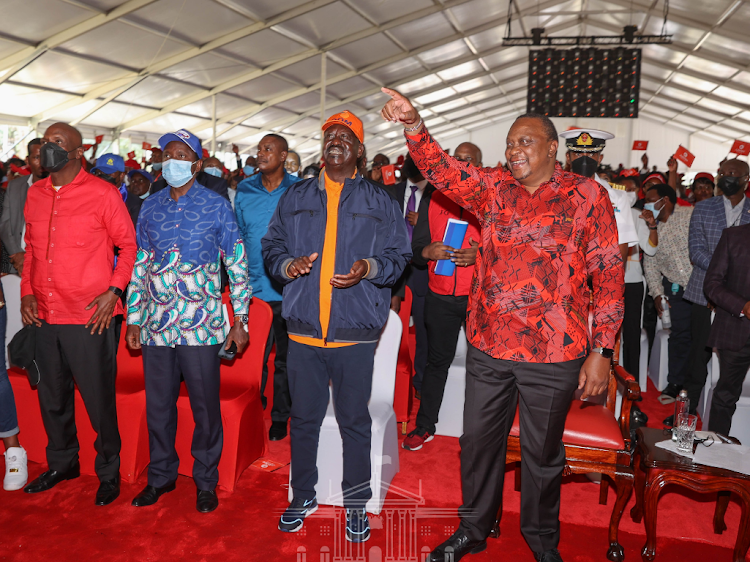 The Wiper boss is reportedly pushing for a raft of demands, including allowing One Kenya Alliance to negotiate as a team with Azimio.

This comes amid the possibility of deal between Kalonzo Musyoka and Raila Odinga.

At the centre of Kalonzo’s demands is a coalition-to-coalition deal as opposed to single party agreement as fronted by Raila men.

Raila wing has been jittery of the coalition-to-coalition deal resulting into a deadlock in the high-level negotiation to reunite the former National Super Alliance duo.

The fear amongst the Oka house, which brings together Kalonzo, Kanu chairman Gideon Moi, Cyrus Jirongo’s UDP and Narc Kenya leader Martha Karua is that conceding to ODM proposal would technically render the fledging alliance dead.

Kathiani MP Robert Mbui – Kalonzo’s close ally – told the Star that they will not make the mistake of allowing Oka to be swallowed by Raila’s Azimio.

The deputy minority leader in the National Assembly said that Kalonzo will only join Raila as an equal partner through a coalition.

In that arrangement, Mbui said, Kalonzo will not appear to have relinquished his presidential ambitions in favour of Raila.

He said it will be a fatal mistake for Kalonzo to walk in blindly into a Raila-owned-Azimio, crafted with sole purpose of propelling Raila to State House.

According to Mbui, Kalonzo risks losing his Ukambani support if he doesn’t join Raila as an equal partner.

“We are going as a coalition because we don’t want to be swallowed. We want to retain our identity. If we go and join blindly then we can lose even our support bases and that is what is important,” Mbui told the Star in a phone interview.

“Once they (Azimio luminaries) sit and say it is Baba then our people will understand that we went in as equal partners but some arrangement has been done and Baba has come on top.

“We don’t want to join an umbrella that already has its owner. If we go and say we are just joining Azimio then it means we have relinquished our ambition which we cannot afford to tell our people,” he said.

Lugari MP Ayub Savula told Star that Oka chiefs tabled their demands to President Uhuru Kenyatta and Raila during a meeting last week and which accepted most of Oka's demands.

According to Savula, who doubles as DAP-K deputy party associated with Defense CS Eugine Wamalwa, Oka demanded, amongst other things, deputy president slot, share of cabinet position and other government appointments.

“They wanted the DP slot but that is difficult because it has been given to Mt Kenya but there is an agreement on the sharing of the government and soon Kalonzo will join us and it will be the game changer,” Savula said on phone.

Initial plan was to have all Azimio parties sign membership agreement on Saturday at Kasarani but the idea was shelved to allow for the negotiation in light of the new demands from Kalonzo wing.

Speaking during ODM National Governing Council on Friday at Bomas of Kenya, Suna East MP Junet Mohamed lifted thelid on the political grandstanding that led to postponement of the signing off ceremony.

“They were supposed to sign members but it is agreed we will have a serious launch of the Azimio coalition in two weeks’ time, where all parties that subscribe to Azimio will be invited,” the ODM director of elections said on Saturday.

During the two weeks, Azimio has lined up a series of countrywide campaigns that will see them visit eight counties.

On Wednesday the team will hold a major rally In Nakuru followed by Kisii and Nyamira the following day.

Other counties the group will hold rallies in include Machakos, Bungoma, Nyeri, Maralal, Baragoi, Wajir and Kisumu.

The Star also established that there will be a joint rally on Saturday, March 12 in Nairobi to be attended by Uhuru, Raila and the Oka chiefs.

The Oka brigade is also pressing for a name-change to reflect their working arrangement with Azimio La Umoja spearheaded by Raila.

To confirm tensions in the ongoing talks, Wiper leader on Saturday said President Kenyatta must spearhead the talks with Raila.

“I propose Mr President that you take leadership of that coalition. I have been amazed by the strength of the three-legged stool, call it three-pillar Azimio- One Kenya alliance and we thank Jubilee for endorsing that proposal,” Kalonzo said during Jubilee National Delegates Conference at KICC.

According to the Kathiani lawmaker, the three-legged stool is a mega alliance with Uhuru ’s Jubilee, Raila’s ODM and Oka on board.

Signalling Oka’s hardball with Raila, the alliance will on Monday formally submit to the Registrar of Political Parties its coalition instruments.

Technically, the formal depositing of the agreement binds the four parties even as they explore working arrangement with Raila.

There are also reports that Oka will officially unveil its presidential flag bearer during today’s signing of coalition agreement by the principals at SKM Command Centre.

From the signing ceremony, the Oka quartet of Kalonzo, Moi, Karua and Jirongo will match to Waiyaki way to deposit their agreement with the Registrar of Political Parties Anne Nderitu before winding the day with a major rally in Embakasi.

Speaking to the Star, Savula said his DAP-K will demand at least three cabinet slots and a further 20 per cent share of all government appointments.

The appointments, according to Savula, include parastatal chiefs, principal secretaries and ambassadors.

Despite her clarification, questions still linger on her stand regarding OKA's latest move.
News
11 months ago

We can’t afford to lose this election - Kalonzo to Uhuru, Raila

He asked the president to take the leadership of the Azimio-OKA coalition.
News
11 months ago

She was absent during the press conference that announced OKA entry to Azimio.
News
11 months ago

Kalonzo, Raila declare willingness to team up ahead of polls