•The former Vice President, however, let the cat out of the bag with sentiments that could be perceived as among the conditions the OKA team has set for the talks.

•OKA leaders however confirm the conversations are ongoing, progressive. 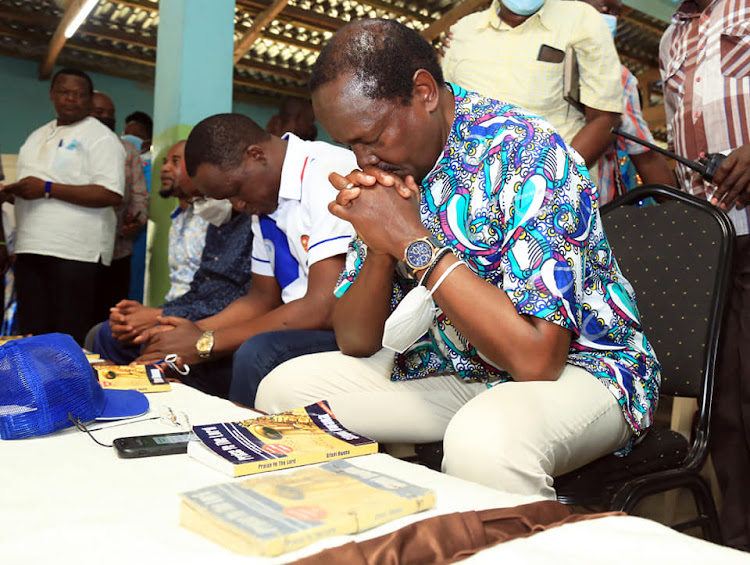 Wiper leader Kalonzo Musyoka has yet again given the strongest signal of ongoing talks that could see One Kenya Alliance join forces with ODM leader Raila Odinga.

The Wiper leader neither confirmed nor denied that they discussed the same during a meeting over breakfast with Raila in Mombasa.

“Those who think that talks can be held when people have breakfast are lost and are confused,” Kalonzo told his backers at Kadongo Grounds, Mombasa.

“If there would be talks, they would be in the open. They would not be underground, stop this habit of painting the picture I am being pushed to join Azimio.”

The former Vice President, however, let the cat out of the bag with sentiments that could be perceived as among the conditions the OKA team has set for the talks.

First, he maintained that if there would be any coalition talks, “they will be on the basis of structured dialogue.”

“Those who want to speak with us must demonstrate good faith. The discussions must be in good faith, without saying this or that,” the former Vice President said.

Kalonzo also said the team must come to the table for a structured conversation where he would be treated as an equal partner.

“Let them also know that the dialogue has to be structured and it would be on the basis of equality of partnership,” he said.

Kalonzo made the sentiments in Mombasa during a tour to popularise the One Kenya Alliance outfit.

The leaders said they will join forces with like-minded parties to “ensure those stealing from Kenyans are dealt with decisively” in a spirited fight against corruption.

“We are talking with other leaders to ensure we are together and ensure we win the August election. Be ready so that we can send these thieves home,” Moi said.

He urged Coast residents to be wary of leaders out to bribe their way to the presidency, asking them to make wise choices at the ballot.

Karua said the August election should be about individuals and not the parties.

“We must not move to another political party and abandon our parties to elect a president,” she said.

“If we get into a big party, the party would have no checks and balances. If a party is big, rights are ignored, as you vote, vote the personality and not parties,” Karua said.

MPs accompanying the OKA leaders sought that the team names a flag bearer to give the direction of their campaign.

“Let them tell us who will be the flag bearer so that we can get ready. This is the team heading to State House, if Azimio people want to get there, let them come talk with us so that we form the government,” Kisauni MP Ali Mbogo said.

At the meeting, Kalonzo pledged that OKA would transform the Mombasa Port by making it a free port similar to the one in Dubai.

He also pledged to build the dual carriageway from Mombasa to Nairobi if OKA forms the next government.

The Wiper leader also dismissed the notion that the August race was between two horses – Raila and Deputy President William Ruto.

“Kenyans have been made to believe there are only two horses in the President Uhuru Kenyatta succession race, I want to tell those thinking so to update their records,” he said.

Kalonzo accused pollsters of manipulating perception rating surveys to portray him as having one per cent support in the country.

“These people carrying opinion polls, update your thinking and records. We shall not accept people being bribed in boardrooms to manipulate figures,” he said.

The former Vice President said OKA would sweep the whole of coast region from Lamu Tana River, Kilifi, and Taita Taveta in the August vote.

Some attributed Ruto's toned-down comments on Uhuru to jitters in UDA.
News
9 months ago