Instead of responding that 'Kazi ni Kazi', the lady responded 'Azimio la Umoja'.

•Sokoro behaved in a manner suggesting that he did not slap the woman. 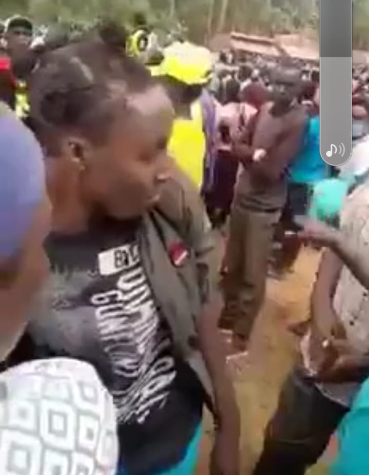 The woman who was slapped.
Image: screen grabbed.

A man has been arrested after assaulting a woman during a political rally in Kisii County.

Joash Atemba Nyang'ate aka Sokoro was caught on camera assaulting a lady who shouted Azimio at a UDA rally in Kisii on Thursday.

During the rally, the Kenya Kwanza leader had asked the crowd to respond 'kazi ni kazi' when prompted.

But instead of responding that 'Kazi ni Kazi', the lady responded 'Azimio la Umoja'.

Nothing can be an excuse for violence against women. They have a voice & right to take part in politics. We highly condemn the recent incident at @UDAKenya rally in Kisii where a lady was slapped at a political rally#SayNoToPoliticalViolence pic.twitter.com/Zb1UGkEKce

It was at this point that Sokoro slapped the woman on her cheek making her turn around.

Sokoro then pretended to have not slapped the woman.

In a statement on Friday, National Police Service police boss Hillary Mutyambai said the man has been arrested.

He advised the public to exercise restraint and accommodate divergence of opinion during the electioneering period.

"This is to mitigate on instances of lawlessness and breach of the peace," he said.