• The  President seemed to have toned down on Monday's attack against his Deputy William Ruto.

• He said the government is planning to open similar facilities in Nakuru, Garissa, Meru and Kisumu counties within this same year. 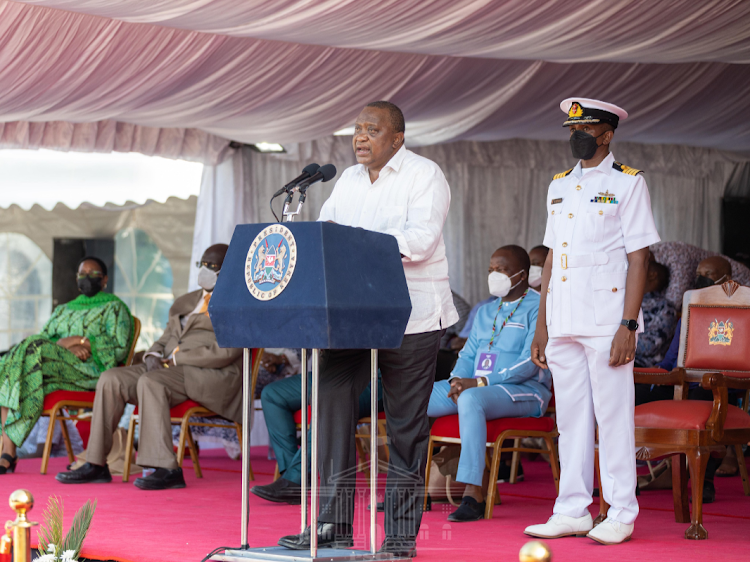 President Uhuru Kenyatta speaks during the launch of the national scale-up of the Universal Health Coverage (UHC) in Mombasa on Tuesday February 8, 2022.
Image: PPS

Small talk and idle chatter do not bring about development, President Uhuru Kenyatta has said.

The Head of State on Tuesday said Kenyans need to choose between development-oriented leadership and busybodies.

The President seemed to have toned down on Monday's attack against his Deputy William Ruto, whom he accused of non-stop politicking.

Speaking during the official commissioning of the multi-million shilling Regional Cancer Treatment Centre at Coast General Teaching and Referral Hospital, President Uhuru said he is interested in the continuity of live-saving projects.

“Therefore, the citizens of Kenya must ask themselves what they want. Today, we are commissioning a facility that will offer life-saving treatment to Kenyans,” he said.

He said the government is planning to open similar facilities in Nakuru, Garissa, Meru and Kisumu counties within this same year.

“You cannot achieve all these without cooperation from other partners. We have partnered with like-minded governors to open up facilities for our people,” he said.

The new facility will be the second cancer centre in Kenya after the one at Kenyatta University Teaching, Referral and Research Hospital in Nairobi.

It has been fitted with state-of-the-art radiotherapy machines and can treat up to 120 patients per week when it becomes fully operational.

President Uhuru said it will offer services at very subsidized prices and Kenyans registered with the National Hospital Insurance Fund (NHIF) will access services for free.

The new facility, which was built in partnership between the national government and the county government, will offer both radiotherapy and chemotherapy sessions.

The national government provided infrastructure while the county government gave out land and human resources.

“The kind of services offered at this centre can only be found in private hospitals in Nairobi or India. In India, you cannot get services if you do not have a minimum of Sh2 million, but in this facility, you will not pay anything,” said the Head of State.

Health Cabinet Secretary Mutahi Kagwe said the government is committed to opening several other cancer centres across the country.

“On March 20, we have targeted to open a similar centre in Nakuru County. We will then go to Garissa, Kisumu and Nyeri counties. When we talk about access to health, this is the centrepiece of the Universal Health Coverage,” said Kagwe.

“Most of the time, sickness needs a lot of support from family. Those that come here at Coast General to be treated are the people that matter in our lives. We are committed to ensuring the citizens get the medicine required,” he said.

Last year, CGTRH attended to 6,296 cases of cancer, according to the data from the hospital administration.

Of the over 6,000 cases, 629 were newly diagnosed cases whereas 1,690 patients were undergoing chemotherapy and about 300 radiotherapy sessions.

On Monday, the President launched the national scale-up of the Universal Health Coverage (UHC) at the Port Reitz Sub County Hospital.

President Uhuru affirmed the government’s commitment to spreading the benefits of UHC across the country.

“In this regard, my administration has developed the Universal Healthcare Coverage Policy, covering the period 2020 – 2030, to guide the acceleration of the progress in attaining Universal Health Coverage,” he said.

The UHC programme was started in the country in 2013 with the launch of the highly free maternity programme dubbed “Linda Mama”, which currently benefits over one million mothers annually.

Since 2013, the investments in health infrastructure has seen an increase of 43 per cent in public health facilities from a stock of 4,429 facilities in 2013 to 6,342 currently.

“In the same period, our ICU capacity has increased by an impressive 502 per cent; and our total hospital bed capacity has also increased significantly by 47 per cent,” he said.

The three-day conference on harmonization of the curriculum and training of healthcare professionals aims at enhancing the skills of healthcare staff, a key factor in the delivery of UHC.

It was a blow after blow for Ruto as speaker after speaker disparaged him.
News
6 months ago

Bring it on my friend, I'm ready! Ruto takes on Uhuru head on

"I am ready for that contest, bring it on," Ruto said as the crowd cheered.
News
6 months ago

He has in the past accused his deputy William Ruto of dwelling on campaigns instead of focusing on the Jubilee agenda.
News
6 months ago

Usituchokoze! MP Sudi fires back at Uhuru after slamming Ruto

Sudi said Uhuru was elected as a result of people campaigning from the top of vehicles.
News
6 months ago
by AURA RUTH
News
08 February 2022 - 15:19