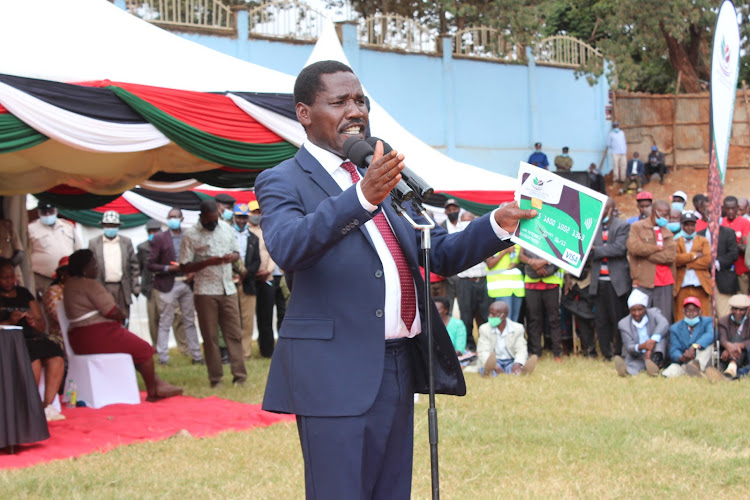 The government is drafting new regulations to streamline the coffee sector following the stagnation of the Coffee Bill 2021 in the national assembly.

Agriculture Cabinet Secretary Peter Munya said the regulations will act as a stop-gap to resolve some of the challenges facing farmers as the government waits for MPs to pass the bill.

Munya who spoke in Murang’a town on Wednesday said most of the complaints made by farmers have been addressed in the bill and appealed for MPs to hasten the process of its adoption.

The CS said the bill is crucial to the reformation of the coffee sector but noted that the government will not continue to sit back and wait for MPs to pass it.

“Other laws pass easy and we wonder why they don't pass the bill. After waiting, I decided to draft the regulations that have gone through public participation and are set for gazettement and I we will start being fought because of them,” he said.

The bill sought to stream line the coffee value-addition chain from the factory to the market.

It was also meant to emancipate farmers from cartels by giving them the power to make decisions affecting production, processing and marketing of their crop at the factory level.

The bill further sought to address the issue of delayed payments to farmers and provided that all payment for coffee should be done through a Direct Settlement System (DSS).

“Some people want your money to sit in their bank accounts for one year so it can accrue interest. These are the things we wanted to resolve with that bill,” Munya said.

After the coffee, money meant for millers, co-operative societies and factories would be sent to them and the rest sent to farmers’ accounts within 14 day."

Munya said he went round the 32 coffee growing counties collecting views on the bill and that the national assembly also conducted a round of public participation.

If passed, Munya said the bill will pacify farmers as it will streamline the sector and help them earn more returns.

The bill further capped coffee co-operatives officials’ terms to only two following farmers complaints that some were using cartels to ensure they retain their positions for decades.

It also made it possible for farmers to be present during the milling and grading of their coffee saying some millers were giving farmers poor grades for their coffee to pay them poorly.

“When New KPCU took over the mill in Meru, we realised farmers were being given poorer grades to deny them better payments,” he added.

The mill’s average milling losses were between 20 percent and 24 percent but they reduced to 17 percent under the management of New KPCU, leading to the capping of milling losses at 19 percent.

He said MPs blame him for the delayed release of the Coffee Cherry Revolving Fund yet they are the ones sitting on its legal framework.

“That is why we have decided to stop waiting for the bill to be passed, We will use the Crops Act and gazette the regulations to eradicate these problems,” he said.

Munya blamed the delay on cartels that he said are hell bent on frustrating reforms.

“People think cartels are only in tea but the ones in coffee are even worse. They have controlled this sector and frustrated reforms,” he added.

He noted that the value of local coffee has doubled since the government revived new KPCU and that those receiving poor payments could be serving loans or producing low quantity and quality of coffee.

Kenyan coffee, he said, is considered as ‘black gold’ and is used to blend coffee from other countries. Its demand is too high and prices have never been an issue.

“Now they are saying that Brazil’s production is down that is why our coffee is earning more. They don’t want to say it is because of the reforms. With New KPCU, prices went up immediately yet we only sell at the Nairobi Coffee Exchange,” he said.

Members had complained that they were not informed when the liquidators were appointed
Counties
8 months ago
by ALICE WAITHERA Correspondent, Murang'a
News
04 February 2022 - 22:00